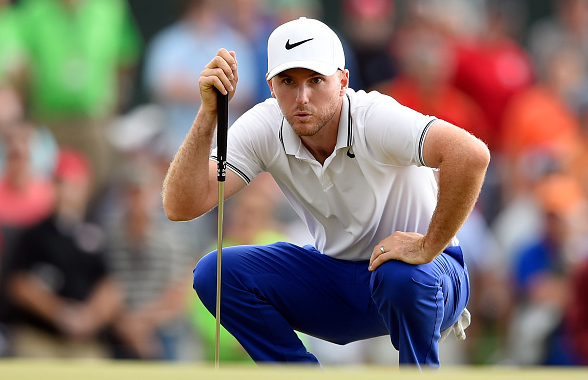 As it often does, the pre-Masters tune-up in Houston led to one more name being added to the Augusta field. That name? Russell Henley.

Starting the day four strokes out of the lead and not yet exempt for The Masters, Henley was a birdie assassin in round 4, carding a stroke under par on an incredible ten holes to shoot a seven-under 65 and emphatically capture the Shell Houston Open Title.

At -20, Henley finished three strokes ahead of 54-hole leader Sung Kang, and four ahead of Luke List and Rickie Fowler. His third career victory, the 27-year-old Georgia native will be playing the tournament that made his home state famous in the golf world for the fourth time, when the Masters tees off in just four days.

How Henley Did It

Despite a bogey and a double-bogey on his scorecard, Henley’s final-round 65 was the lowest score of the day by two strokes. His birdie binge started early, with birdies on five of his first eight holes to tie for the lead before the turn.

A double-bogey on 9 was a temporary setback as he opened the back nine with four more birdies in a six-hole span to get comfortably ahead of Kang, who parred his last nine holes. A birdie-bogey finish secured the three-stroke victory for Henley, his first win in three years.

Henley did most of his damage on the greens, finishing first in the field in both strokes gained: putting and putts per green in regulation (GIR). He hit only 8 of 14 fairways, his worst of the week by three, but still hitting 16 of 18 greens, he gave himself many birdie chances.

What It Means For Henley

Henley was one of the best players in the field who had not already qualified for The Masters, and with the victory, he will be going to Augusta for the fourth time. His last appearance at The Masters came in 2015, when he finished T21.

Henley earned considerably less money in 2016 than he did the three previous seasons, but has played well in 2017 even before this week, having made 8 cuts in 10 events, with five finishes inside the top 16. Both of Henley’s previous two PGA Tour victories occurred at the Sony Open.

Hudson Swafford, who qualified for The Masters with a win at the CareerBuilder Challenge in January, shot a final round bogey-free five-under 67, his third 67 of the week to notch a finish of solo-sixth. Swafford hit 11 of 14 Sunday fairways.

Another final-round 67 was posted by the young Spanish star, Jon Rahm, leading to a top 10 finish the week after going runner-up at last week’s WGC-Dell Technologies Match Play.

Tied with Rahm in 10th place was Andrew Loupe, who had been in the midst of a nightmare season prior to Houston, missing the cut in all seven of his starts this season. Loupe shot a three-under 69, finishing par or better in all four rounds.

Jhonattan Vegas, another player who will be at Augusta next week, did not have the final round he envisioned to finish off an otherwise strong week, playing the first seven holes in +2, and finishing with a one-under 71, which while not terrible, was one of the highest rounds of Sunday.

The worst round of the day was shared by J.P. Poston and Tom Hoge, who both dropped 39 spots on the Sunday leaderboard with a pair of five-over 77s. Hoge had three consecutive double-bogeys at one point.

Rickie Fowler has been fantastic this season, a great sign for a player who is facing as much pressure to win a major as anyone on Tour. For 66 holes, Fowler was the best player in Houston this week, but his worst stretch of play: the final two holes on Saturday (+3) and the first four holes on Sunday (also +3) was very bad.

Fowler rebounded after the tough round four start, playing the rest of his round in five-under to shoot a two-under 70 and finish in a tie for third. Fowler tied Henley for the field lead in birdies for the week.

“I wasn’t expecting to go back to Augusta. I was planning on not going, but I was going to try my best to win. So, the fact I get to go back is pretty cool and I’m excited. It hasn’t really sunk in yet.”
–Russell Henley, 2017 Shell Houston Open Champion, and final player added to the field at Augusta National.