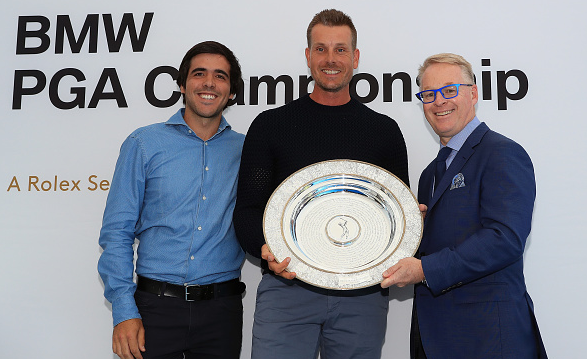 Seve’s oldest son, Javier Ballesteros, 26, along with European Tour Chief Executive Keith Pelley presented the reigning Open Champion with the award, which is voted for by every European Tour Member at the end of a season and now carries the name of the five-time major champion.

Stenson was the overwhelming winner of the 2016 vote by his fellow professionals at the end of a season which saw him claim his first major title in The Open Championship at Royal Troon, as well as winning the Race to Dubai for the second time in four seasons.

“Seve was one of my idols and it was such a shame he had to leave us early, but this award will help us remember him even more in the future.” -Henrik Stenson

“It’s very special to receive an award that is voted from your peers and your colleagues, and to have it named The Seve Ballesteros Award from here on, I think that is something very special because he was an inspiration to anyone who played the game of golf, especially us Europeans,” said Stenson.

“I’ve met Javier before and I think the Ballesteros family knows how much everyone here at the European Tour appreciated what Seve did for European golf.”

The Seve Ballesteros Award has the names of all the European Tour members who have won Major Championships, starting with Seve’s own Open triumph at Royal Lytham & St Annes in 1979, inscribed around the central image which is of his famous fist-pumping celebrations on the 18th green of the Old Course at St Andrews after his Open win there in 1984.