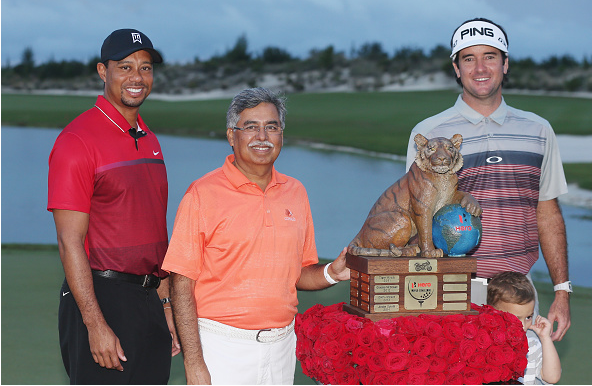 The Hero World Challenge may be an unofficial event, but that is not going to keep the elites of the PGA Tour from wanting to win it.

Aside from it being in the Bahamas, maybe the best location on Tour, the tournament boasts a great opportunity for players to keep their form and further improve their image during a quiescent time of the golf season.

It is the perfect opportunity for players to fill an open spot on their schedule with an exclusive event hosted by a charitable foundation. The payday is a good one for everybody: even those who play poorly. It epitomizes a situation where “everyone wins”.

This year’s Hero World Challenge is being especially anticipated for one reason: Tiger Woods.

For the first time in 15 months (466 days as of Thursday) arguably the greatest player in the history of golf will be teeing it up in a competitive format. This is far and away the longest layoff Tiger has ever had on Tour, and at a time where golf is replete with amazing, young talent, the whole world will be interested in how Tiger now measures up.

Talk of when, if ever, Tiger will win again has been the biggest discussion point for years by analysts and fans alike. Everyone is excited to see if the legend can conjure up his old magic and regain relevance in a sport that has had to learn to survive without its highest-profile participant.

The Hero World Challenge, which is hosted by the Tiger Woods Foundation, has filled the December void in the schedule since 1999 when Tom Lehman shot a final round 67 at Grayhawk Golf Course to defeat prime David Duval (#2 in the world at the time) by three strokes.

Since its inception, the tournament has been very exclusive: the inaugural event had just 12 golfers, and seventeen years later, it has only just expanded to 18. The field features the winners of the previous season’s major championships, the 11 highest-ranked players in the OWGR available, the defending champion, the tournament host (Tiger Woods), and one sponsor’s exemption (Zach Johnson).

The tournament has been played in Arizona, Calfornia, and more recently at Albany in the Bahamas.

Spieth’s victory, which came in 2014, was an unbelievable 10 stroke blowout over Henrik Stenson.

The defending champion of the Hero World Challenge is Bubba Watson. The victory catalyzed a six-event tear where Watson won twice, finished second once, and also had finishes of T10 and T14.

It was sizzling form that Bubba would not show again until the Olympics in Rio (T8). Off the strength of an immaculate 63-66 weekend in the Bahamas, he would go on to win the tournament by three strokes over Patrick Reed.

1. The Return of Tiger Woods

We have been lead to believe on numerous occasions in the past year that the return of Tiger Woods was imminent, only to have him cite an injury or performance issue, further delaying what fans are on pins and needles to see.

His withdraw from the Safeway Open in early October was especially frustrating, as he was committed to playing the season opener just a few days prior.

There is a chance Tiger could withdraw again before Thursday, but being an unofficial event with a small field, this is an ideal time for him to get back into competition and see where his game is. He cannot miss the cut in this event, since there is no cut, and with another break after this week, he can evaluate his game and spend time working out the kinks before going all in for the rest of the 2016-17 season.

Tiger’s troubles have been well-documented and analyzed from every conceivable angle. He is currently ranked 898th in the world. Prior to the beginning of his 16-month absence, he was playing the worst golf of his career.

In 2015, he had missed the cut in three of four majors, and had only one top 10 (a T10 at the Wyndham Championship, where he lead after a 64-65 start) in 11 events. At the U.S. Open, a major that Tiger has won three times, he was especially terrible, hacking his way to a first round 80 and missing the cut by a mile (he was +16 after two rounds). He has not won on Tour since the 2013 WGC-Bridgestone Invitational, and has not won a major since his monumental triumph on one leg over Rocco Mediate at the 2008 U.S. Open.

The man who looked like he was going to re-write the history books for major victories has been stuck on 14 for nearly nine years, which is still phenomenal, but disappointing for someone who puts so much into the majors.

All that being said, this is still a player who, when healthy, has been perhaps the most dominant athlete in the history of American sports. At his best, no one has been more feared by their competition. As recently as 2013, he won five times and was named PGA Tour Player of the Year.

Despite a cavalcade of injuries in recent years, he still has the appearance of someone who has what it takes physically, and at 40 years old, he should not quite yet be in the twilight of his career. Mentally, however, the last version of Tiger we saw was an absolute wreck, and it is anyone’s guess where that mental game is now.

When Bubba Watson won last year’s Hero World Challenge, his game was in a great place. He was fresh off a formidable 2014-15 season (outside of the majors, anyway) where he won twice, in addition to three runner-ups, and two other third place finishes. He finished in the top 10 in 10 of 19 events, an unbelievable 53% clip.

Shortly after his victory at Albany, he won the Northern Trust Open and was runner up to Adam Scott at the WGC-Cadillac Championship. Since that torrid stretch of play, however, Bubba’s golf has been surprisingly pedestrian.

After his WGC-Cadillac runner-up, he did not post another top-10 finish in an official event until a T10 at the season-ending Tour Championship. His best major result on the year was a T37 at The Masters, a tournament he had previously won twice.

As the year progressed and his results weren’t improving, Bubba went from looking like a Ryder Cup lock to missing the team entirely.

That being said, there are reasons for optimism. Bubba played well in the FedEx Cup playoffs, with finishes of T13 at The Barclays, T20 at the BMW Championship, and the T10 at the Tour Championship.

Prior to the playoffs, he had a strong performance at The Olympic Games, shooting seven-under par, which was good for a T8 in the 60-man field. Among the four American representatives in Rio, only bronze medal winner Matt Kuchar was better.

If Bubba really wants to put the 2015-16 season behind him, a great outing in Albany would be an excellent start. In his only other tournament of the new season, he finished T54 at the WGC-HSBC Champions in Kuala Lumpur with a +7, 28 strokes behind winner Hideki Matsuyama.

Atop the current “best to not yet win a major” list might be Japanese superstar Hideki Matsuyama. He is coming off another great season, winning the Waste Management Phoenix Open and finishing in the top 10 of seven other tournaments, most notably a T7 at The Masters, a T7 at The Players, a T4 at the PGA Championship, and a fifth place finish at the Tour Championship.

The victory in Phoenix, where he knocked off Rickie Fowler in a playoff, was the second career win for the 24-year-old. In just three seasons since becoming a full-time PGA Tour member, Matsuyama has averaged an impressive $3.5 million in earnings per season.

It is hard to imagine a better start to a new season than what Matsuyama has had: a runner-up finish at the CIMB Classic in Malaysia, and a win at the WGC-HSBC Champions in Shanghai.

What kind of season could that start lead to? Matsuyama seems extraordinarily motivated to join the ranks of the tour elite, and a good showing in Albany could signal great things for Hideki in 2017.

At #2 in the world, Johnson is the highest ranked player in the field (#1 Jason Day is still rehabbing the injury that ended his FedEx Cup Championship hopes prematurely).

DJ is coming off the finest season yet of his prolific career, with three victories, including a breakthrough win at the U.S. Open, and an amazing 15 top 10s in 22 events. He was the obvious choice for the PGA Tour’s Player of the Year.

Henrik Stenson
The second-highest ranked player in the field is Sweden’s Henrik Stenson, a player who, like Dustin Johnson, had an enormous 2015-16 season highlighted by a first major victory, an absolutely dominant effort at the Open Championship.

Stenson also had a fine season on the European Tour, winning the year-long Race to Dubai, beating out Masters champion Danny Willett and FedEx Cup Champion Rory McIlroy in the process.

Jordan Spieth
Maybe the most popular player in the field, Spieth was unstoppable in the 2014 Hero World Challenge, winning the tournament by an incredible 10 strokes in a record setting 26-under-par finish.

He was able to use the tournament as a jumping off point for a prodigious season that included five victories, including two at majors (The Masters and the U.S. Open). In 2015-16 Spieth could not quite reach the sky-high bar he set the previous season, but still had a successful season with two wins and eight top-10s. Spieth enters the big money Bahamas event fresh off a win at the Australian Open.