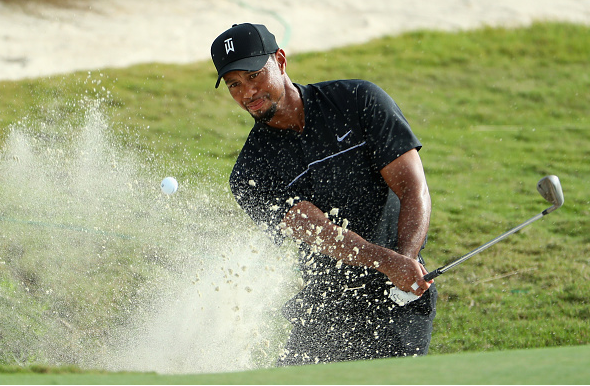 It had been more than 15 months since Tiger Woods last teed it up in a competitive tournament, and for a while at the Hero World Challenge in the Bahamas, Tiger looked like Tiger again, and with birdies on holes 6, 7, and 8, the legend reached -4 for the tournament.

It was an extremely promising start for the 14-time major winner who has not won on tour since 2013. Unfortunately for Tiger, the wheels fell off after the blazing start, as two double-bogeys over his last three holes led to a final first round score of one-over 73, which was good for 17th place in the elite 18-man field.

Tiger’s return overshadowed the rest of the tournament, which after 18 holes is led by recent Ryder Cupper J.B. Holmes, who at -8 is one stroke ahead of red-hot Hideki Matsuyama.

The Hero World Challenge is getting a lot of press for an unofficial PGA tournament, and barely any of that is focused towards J.B. Holmes. A typically quiet, unassuming player, that might be just the way he likes it.

Holmes bogeyed the par-4 first hole, but from there, played the best golf of anyone in the field. He especially established himself when he went on an absolute tear in the middle of his round, playing 8-12 in birdie, birdie, birdie, eagle. He finished the day with seven birdies and the eagle, good for an eight-under 64.

Tiger’s round could not have started any better, as he birdied #3, and then added three more birdies on 6, 7, and 8. Tiger would remark after the round that he felt the “feel” of the round as early as the second hole, something that pleasantly surprised him, given the extended layoff.

From there, Tiger looked less like a former #1 in the world, and looked more like the broken Tiger who has been either a disaster or absent since the 2013 WGC-Bridgestone Invitational, his last victory.

Tiger was especially disappointed with his form midround, where he bogeyed 9 and 11, both par-5s. He birdied 15 to get back to -3, but double bogeys on 16 and 18 dropped him to 17th place, 1-over par.

His iron play was very good, but he was losing his driver to the left all day, best illustrated when he pulled out the driver on 18 and proceeded to launch his ball into the water. Olympic gold medalist Justin Rose (+2) was the only player in the field to finish behind Tiger.

It is early in the season, but nobody has played it better so far than Hideki Matsuyama. The Japanese sensation finished runner up at the CIMB Classic in Malaysia and then won the WGC-HSBC Champions in Shanghai.

After 18 holes, he looks primed for another high finish, as he played the back nine in six-under 30 and finished -7 overall. A double-bogey on the par-3 8th was the only blemish on his scorecard.

“If you think about it, I hit three shots in the bushes and one in the water today. It could have been something really good today. I got off to a nice, solid start and made a few mistakes there. I played the par 5’s not very well in the middle of the round, and consequently got it going the wrong way.”
–Tiger Woods