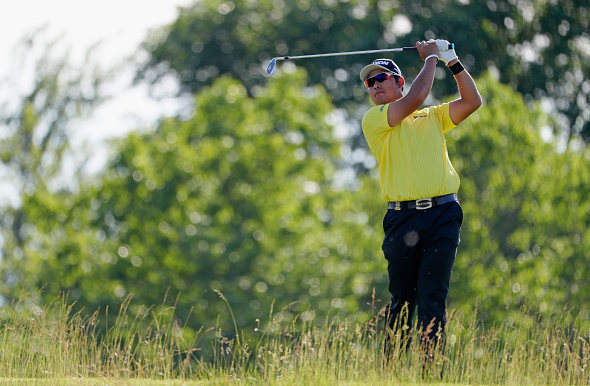 After struggling to an opening-round 4-over 74 at Erin Hills, Hideki Matsuyama was sitting at T82 and in danger of missing the cut at the 117th U.S. Open.

What a difference a day makes.

The sizzling second-round 65 moved the Japanese superstar a whopping 74 spots up the leaderboard (from T82 to T8), while earning the ‘Performance of the Day.’

A 7-under 65 in Round 2 helped Hideki Matsuyama erase a 2-over 74 from Round 1 and earned him Friday's @Lexus Performance of the Day. pic.twitter.com/5JlrbXkyE1

Following an historic nine-tournament stretch where Matsuyama won five worldwide titles (with two runner-ups), highlighted by a successful defense in Phoenix, the 25-year-old phenom has cooled off considerably (no top 10s in seven starts since).

But with a proven track record, a structured swing, and a head of confidence, Matsuyama is in prime position to secure his first major championship.