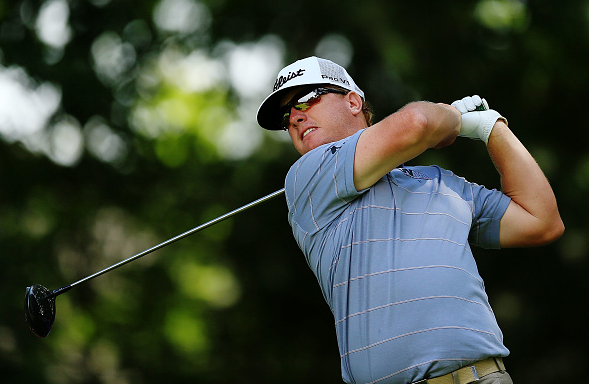 Charley Hoffman fired a 7-under 65 on Saturday at Glen Abbey, and will take a one-shot lead into the Sunday’s final round of the RBC Canadian Open.

At 2-under through eight holes, Hoffman got off to a bit of a slow start, but was in the conversation.

The 40-year-old, though, made his charge to the top during a seven hole stretch (9 through 15) of five birdies to grab the lead outright.

“Got off to a little slower start than I wanted to. Obviously wanted to get a birdie early in the round but wasn’t able to,” said Hoffman. “Middle of my round got some birdies and hit some great iron shots. You know what, all in all, just hit good shots and good positions to make putts on the greens.”

Hoffman’s only blemish of the day came on 17, where a bogey, coupled with a birdie by Kevin Chappell, who was one hole behind, momentarily bumped him from the lead.

On 18, however, it was a role reversal, as a Hoffman birdie preceded a Chappell bogey which transferred the lead back to Hoffman.

“On 17, hit a great putt that lipped-out there. It was a couple but obviously made a couple I didn’t think I was going to make and happy with 7-under for sure,” continued Hoffman.

Chappell, who won earlier this year at the Valero Texas Open, will be paired with Hoffman in the final round after shooting a 6-under 66.

The bogey-free record-round of Garrigus included six birdies and two eagles (2 and 16).

“Kind of started off with that eagle on 2. Missed the green short, like a 30-footer up the hill, through the rough — through the first cut and rolled on to the green and went in,” said an excited Garrigus. “Next hole, I stuffed it in there. I chipped in on the par 3 and stuffed it on the other par 3 and made it and I chipped in on 8, and I’m just thinking: Oh, my gosh, what is going on right now. I’m not going to think about anything. I’m just going to keep going.”

Six players are tied for fifth at 14-under, headlined by defending champion Jhonattan Vegas, who posted a third-round 67.

First round co-leader Matt Every posted a 2-under 70, and leads a group of five at 13-under.

Graham DeLaet (73) and Mackenzie Hughes (74), the only two Canadians who made the cut, struggled to over-par rounds and dropped to T41 and T55, respectively.

Bubba Watson followed up a second-round 73 with a 1-under 71 and sits at 6-under.

“Well, everybody on the PGA TOUR is really good. But it’s hard to win golf tournaments out here. Guys just don’t go backwards very often, so you have to keep making birdies, stay aggressive. Especially the finish with the three par 5s, you have to get them.”
–Charley HoffmanFlores, Round 3 Leader, RBC Canadian Open