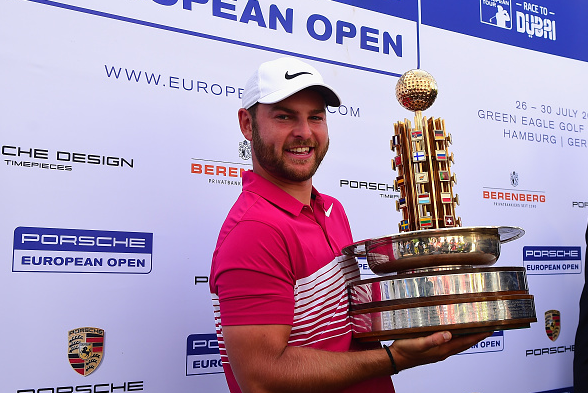 In what seemed like a match play, Smith, the 54-hole leader, and Levy were paired together in Sunday’s final group.

After several lead changes, Levy took a one-shot lead to the final hole, but a dramatic birdie by the 24-year-old Smith sent the two players into overtime.

On the first extra hole, Levy had a chance to close it out, but missed a 3-footer for eagle, and the two returned to the 18th tee all-square.

This go-round, though, Levy struggled to a par, while Smith tapped in for an easy birdie and his first victory on the big tour.

“I’ve loved it. It’s been nerve-wracking at times but I’ve really enjoyed it,” said Smith. “It’s all a bit surreal.”

Siddikur Rahman (68) of Bangladesh, and Swede Johan Edfors (70) tied for third at 11-under. South African Zander Lombard shot 5-under 67, and finished tied for fifth at 10-under, alongside Spaniard Adrian Otaegui, and Jens Fahrbring of Sweden.

American Patrick Reed struggled to a final-round 1-over 73 and finished 6-under, tied for 19th. Reed’s Ryder Cup teammate, Jimmy Walker, fired a 3-under 69 to get to 4-under, tied for 33rd.

“Obviously the Challenge Tour last year and the EuroPro the year before that. It’s been fun,” said Smnith. “I had a really good start to the year and the first aim was just to secure my Tour card, which I managed to do. And then the second goal was to win an event, which I’ve managed to do.”
–Jordan Smith, 2017 Porsche European Open champion