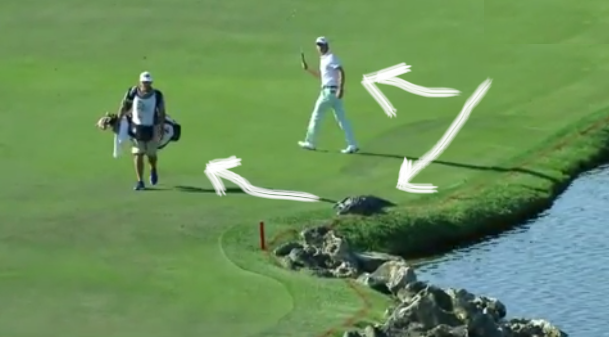 Cody Gribble became an Internet star when a video of him nonchalantly slapping a sunning alligator went viral. The good ol’ boy from Texas brushed it off, saying they’re “not that quick” and “if you think I’m crazy you should meet my dad.”

Well, the very next day, the gator was back, and this time it was Smylie Kaufman’s turn to take on the gator. Except, like most people, Smylie wanted no part of the green monster, and took off as if his pants were on fire.

Personally, the under the radar moment for me is watching the caddie’s slow reaction. He has no clue about the gator, and is just sauntering about – la-dee-da. But as soon as Smylie tells him what happened, he was outta there… Comedy gold.