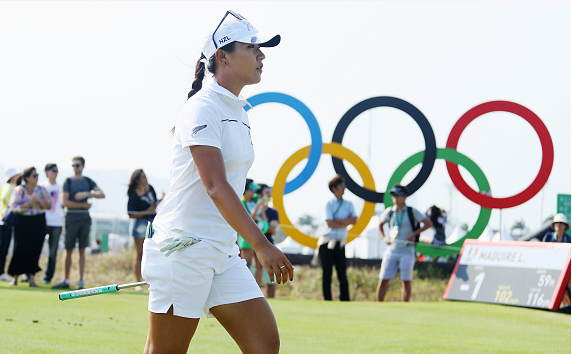 We all knew it was going to happen, it was just a matter of when. For 36 holes, New Zealand golf superstar and world #1 Lydia Ko has been lurking in the top third of the leaderboard, but had not quite had her Olympic breakthrough yet. That all changed in round three.

Ko got out to a sizzling front nine 29, which included a hole-in-one on the par-3 8th hole, before parring the entire back nine for a third round 65. After being seven strokes back to start the day, Ko is now only two strokes out of the lead that is currently held by Korea’s Inbee Park.

Park had six birdies and five bogeys to ultimately shoot a one-under 70 to hold the 54-hole lead. In addition to Ko, Park leads American Gerina Piller by two, and China’s Shanshan Feng by three. Going into Saturday’s round four, it looks like a four-woman race for the three spots on the podium.

The wind also made a return a late presence in Rio, after a benign first two rounds. The majority of the field struggled, seemingly everyone except for Ko, in the 30mph wind gusts. The course was set up for wind to play a factor, and on Friday, we saw exactly what the course designers had in mind.

Inbee Park was a surprise 36-hole leader, despite being one of the best ever to play in the LPGA. Due to a thumb injury, she had not played the weekend since Mid-April, and did not look well when she was trying to tough it out. She vaulted into the lead mostly due to intelligent play where she limited mistakes better than anyone in the field.

Today, we saw that the 28-year-old Hall of Famer can still go low. While her five bogeys were disappointing, Park birdied three holes on both nines to stay under par for her round.

Round 1 Leader Pulls Out

One of, if not THE, gold medal favorite(s) in the lead-in to Rio was Thailand’s Ariya Jutanugarn, winner of four of her last nine events, including the RICOH Women’s British Open. The long-hitting 20-year-old Jutanugarn was fantastic in round one as a six-under 65 gave her solo possession of first. She fell slightly off the pace in round two with a modest even-par 71, but was still just four strokes back to start the day.

Today, it was apparent early that something was wrong with her, and after hitting 12-over on the day, Jutanugarn withdrew with an injury to her left knee. It was a sad exit for the woman who was red hot coming in.

Despite being ranked in the top 15 in the world, American Gerina Piller was not spoken about much going into the week, overshadowed by fellow American golfers Lexi Thompson and Stacy Lewis. Piller put on a putting clinic in round 2, and continued her hot play into round 3, as she went out in bogey free four-under par. She cooled off with a few bogeys on the back nine, but for the day, she shot a 68, and at nine-under for the tournament, she is nipping at the heels of Inbee Park.

Piller has been close many times in her career, but has still been winless as an LPGA member. A gold medal would be an amazing way for Piller to get her first victory.

Collapsing Out of Contention

The leaderboard was tightly packed to start the day, but as the winds swept the fairways, they took many of the leaders with it. The most notable collapse was from Canada’s 18-year-old sensation Brooke Henderson, who had reached a share of third place after a bogey-free round two. The back nine was a complete disaster for Henderson, as a double bogey on 16 and a bogey on 17 led to a 75, and dropped her to seven strokes behind Park.

Stacy Lewis, who set an Olympic record with a 63 in round two, was nowhere near that impeccable in round three. A double bogey on the par-5 18 was especially painful, and now after a five-over 76, Lewis is seven back of the lead, and five back of third place. India’s Aditi Ashok had a population of billions watching her every move through an amazing first two rounds (68-68), but the wheels came off today for the youngest woman in the field. Ashok double-bogeyed 15 and 18 to finish with an eight-over 79, effectively ending her medal hopes.

“Yeah, that would be pretty cool to have a podium sweep. It’s definitely been talked about amongst us. But again, there’s a lot of golf to be played and you can’t put the cart before the horse. For me, I just want to focus on playing consistent golf and hitting good shots and making putts.”
–Gerina Piller after round two, when all three Americans were in good shape. (Lewis and Thompson both faltered in round 3, and Piller now seems to be the U.S.’s only hope for a medal.)