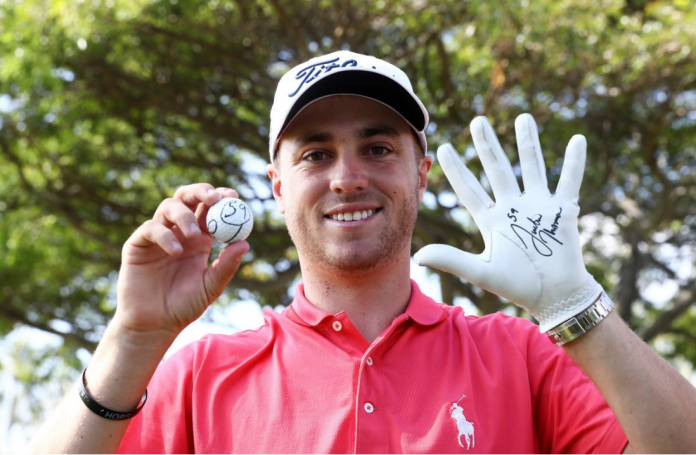 Justin Thomas shot an opening-round 59 at the Sony Open in Hawaii, which pretty much cements his status as the world’s hottest golfer for the moment.

Following this historic round at Waialae Country Club, social media was on fire with all kinds of opinions, clips and photos.

First the actual putt, followed by congrats from Jordan Spieth and Daniel Berger.

A few tweets/insight from some our favorite golf media follows: Schupak, Wacker, and Shackelford.
https://twitter.com/brianwacker1/status/819690829438545920

Anytime someone goes 5 shots better than the next best score in his wave @PGATOUR, you can safely say that person has golfed their ball.

Thomas becomes just the 7th PGA Tour player to break the 60 barrier in a tournament.

And its youngest at 23 years old.

Thomas quickly signed his Footjoy glove and Titleist Pro V1 golf ball, which are headed for the Hall of Fame.

Good start to the week there, JT. pic.twitter.com/soEePj2bOf

Thomas said he was going to lay up. Then basically said, never mind.

Another angle of the historic putt. Note: Spieth with the left arm pump.

The putt for Justin Thomas to shoot 59. pic.twitter.com/9D48dCp7W4

JT posing with his historic scorecard.

Mom and Dad proudly watching their son from the media room.

Mom and Dad picked a good couple weeks to watch their son tee it up … pic.twitter.com/qvInWwODes

Factoid: No player has finished outside the Top-5 who has shot a sub 60 in a round.

Every player who shot 58/59 finished in the top five that week.

Should be a good one for JT. pic.twitter.com/Lzp6AldWIe

Wins at Kapalua, shoots an opening round 59 a few days days later… @justinthomas34 says he is playing "pretty well," we agree! #1gloveingolf #1shoeingolf

Golf Digest with a nice photo of two star golfers.

Man on FIRE! @justinthomas34 just EAGLED his final hole to shoot an opening-round 59 (!) at the Sony Open. ???

Brian Wacker with another angle of JT’s scorecard along with some useful numbers.