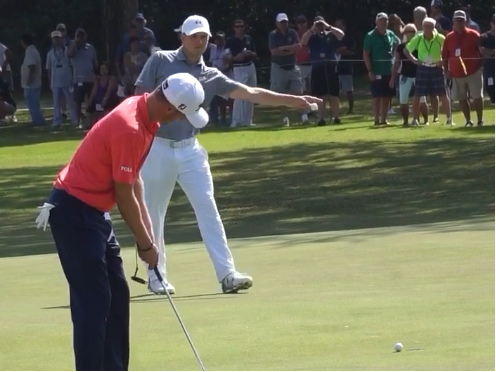 Update 1: Here’s Thomas just-missing again on the 7th (his 16th)… and Spieth reacting.

How does it miss!! @JustinThomas34 and @JordanSpieth can't believe it. Thomas needs to go -2 in last 2 holes for 59. 9th is reachable par5 pic.twitter.com/nizQ73BLxk

Thomas will need two birdies over the final two holes – or an eagle on the final hole, a reachable par-5.

Last week’s winner at the SBS Tournament of Champions, Justin Thomas, is doing it again. Thomas is currently 9-under through 15 holes.

Here’s Thomas rolling in a birdie at the 4th, his 13th hole of the day, to get to 9-under. Thomas then made par at the 5th and 6th.

The 5th ranked player in the world, Jordan Spieth, is pulling for his good buddy to pull off the rare feat.

Even Jordan Spieth wants to see some history.https://t.co/lOtIyzVtoE