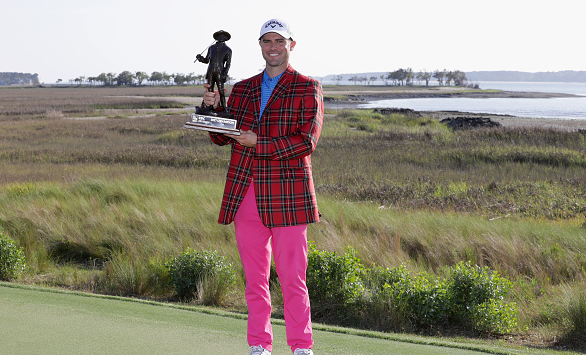 Following his win at the RBC Heritage on Hilton Head Island at Harbour Town Golf Links, Wesley Bryan answered some questions from the assembled media.

Here’s a transcript of the Q & A session.

On Meaning Of Win

QUESTION: Wesley, congratulations. What does it mean to win here in South Carolina, Hilton Head Island, for your first PGA Tour victory?

WESLEY BRYAN: This is as good as it gets. It’s one that I grew up dreaming on the practice green late at night when I was a kid, like this putt’s to win the Heritage. And to get it done here is one of the coolest experiences ever.

QUESTION: Take me through your emotions, now. The putt at 15, the birdie you got there gave you the lead at 13 under. Were you cognizant of where you stood and what was going on?

BRYAN: Not really. That birdie — I just thought I needed that birdie there to keep up. I didn’t realize that it would give me the lead. And I knew 16 being a short par-4, not an overly tough pin location, I figured I needed one, maybe two coming to the house. And luckily the guys out in front, or that were just behind me didn’t make any birdies. And I was just kind of able to limp in, so to speak.

QUESTION: 500 FedExCup points puts you 14th now in the standings. That top-30 go to Atlanta. That’s pretty solid in the season for you.

BRYAN: Yeah, I’ve got to keep my head down and keep going to work and look up at the end of the year. I mean obviously the No. 1 goal coming into the year was to get to Atlanta. And we’re halfway home. And as long as we keep up the good play we should find ourselves there come — I don’t know what month that is — August, maybe?

QUESTION: Finally, when you put the pink pants on today, you thought this would go good with that tartan jacket?

BRYAN: Actually, I think it’s going to look terrible. But I’m going to still be cheesing ear to ear.

QUESTION: Four shots back, beginning this final round. Wesley, what was the game plan at the start of the day, to at least try to get yourself in the mix, let alone win?

BRYAN: I played No. 1 great all week. I knew if I could get off to a hot start I’d be able to put a little pressure on the leaders. And didn’t birdie 1. And then No. 2, made another pretty poor par. And then bogeyed the third hole. And honestly there were doubts. And then turned it around, and made those four birdies in a row, and kind of swung myself back in contention. And from there, honestly I got a little lucky, but the leaders didn’t keep going a little bit deeper and they kind of stalled out and I was able to make a couple on the back nine.

On Nerves Down The Stretch

QUESTION: What were the emotions like coming down the stretch on the back nine?

BRYAN: I got really nervous. I’m not going to lie. But was able to keep it together and I was hitting quality shots coming down the stretch. And it was things that I was able to do last year that I could draw on experiences knowing under the gun last year I was able to perform. And honestly the only thing different here is the golf course. And was able to kind of draw on that experience and use it to my benefit.

QUESTION: Speaking of last year, 15 months ago you had never played in a PGA Tour-sanctioned event. You win three times on the Web.com Tour. Now a win on the PGA Tour. How has this happened so quickly?

BRYAN: I don’t know. Will Farrell said it best, “Escalated quickly.” Honestly I’ve got no idea. It’s still kind of surreal. Maybe one day I’ll wake up and kind of realize what’s gone on the last, I don’t know, 15 months or so.

On Winning At Home

QUESTION: Your first win obviously special. But what does it mean to do it here in the state of South Carolina, a place you’ve called home for at least 22 of your 27 years, to become the first South Carolinian to win the tournament?

BRYAN: This is special. This is one behind any major I would put up on my list pretty high. To be able to knock it down, especially in front of the home crowd. They were awesome out there today. I got a bunch of cheers when I did stuff. And a bunch of encouragement when I screwed up little bit. But it was really special.