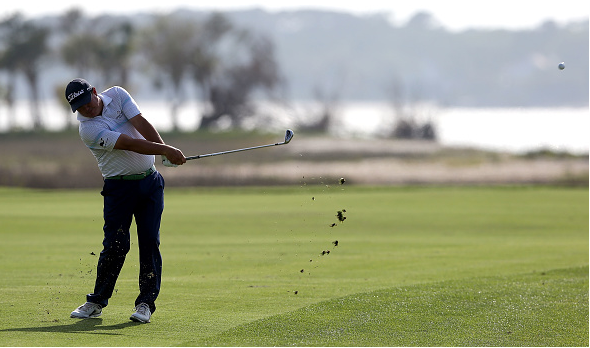 The 2016 Web.com Tour Rookie of the Year, Wesley Bryan, captured his first PGA Tour victory in come-from-behind fashion. The former trick shot artist shot a final-round 67 to win the RBC Heritage by one.

Luke Donald carded a final-round 68 to finish inside the Top-3 at Harbour Town – his 4th Top-3 finish in his last six trips to the RBC Heritage.

Rounding out the Top-5 are Patrick Cantlay, Ollie Schniederjans and William McGirt – who all finished at 11-under- par.

To wrap up coverage from Hilton Head, here’s a look at three of the best shots of the week.

There aren’t many things that would be cooler than winning on Sunday on the PGA Tour but getting an ace is definitely up there!

Peter Malnati had a pretty decent week going until he played his first 16 holes in Sunday’s round in 6-over, but that all changed when he stepped up to the 17th tee. The 174-yard par-3 was playing as the 7th hardest hole, but Malnati made it look easy with this perfect ace.

Malnati went on to finish his day at 4-over and ended up dropping 28 spots down the leaderboard into a share of 44th.

What a week it was for Jason Dufner, well… Thursday through Saturday were good. Dufner started his 3rd round trailing the leaders but after two eagles and a birdie on his opening nine, he was right in the mix.

Dufner eagled the par-5 2nd hole after hitting his approach shot to 11 feet and then went on to eagle the par-5 5th hole after holing this wedge shot from the fairway.

A hole-out for eagle is better. pic.twitter.com/VdSyClWU6f

But after a disappointing 5-over 76 on Sunday, Dufner fell 10 spots down the leaderboard into a share of 11th.

There isn’t a better way to end your round than chipping in for birdie. Donald did exactly that when he missed the 18th green in Friday’s round after his wayward approach shot.

Donald’s excellent chip found the back of the cup for a birdie to cap off a round of 67.

Donald went on to finish runner-up and continues to be a force at Harbour Town.