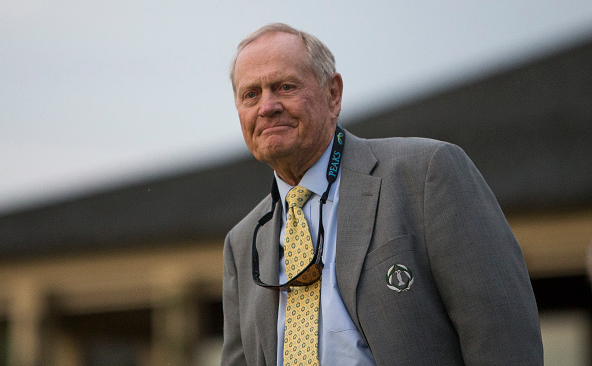 On Tuesday, Jack Nicklaus was on hand as part of some of the pre-tournament festivities for The Honda Classic.

The 18-time major winner, and designer of PGA National – the Honda’s host course, took several questions from the golf scribes, but particularly expounded on questions related to the distance of today’s composite golf balls. 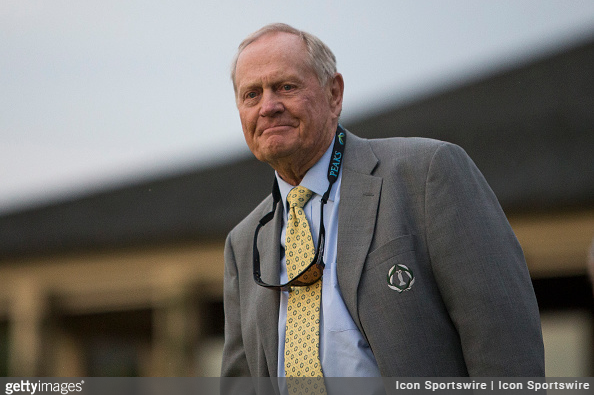 How can this game (speed up) —

NICKLAUS: It’s too long. The golf ball is the biggest culprit of it. I mean, if you took a golf course that we played, we used to play golf courses 6,500 yards, 6,600 yards and that was a championship golf course. Today you’re 7,500 or 7,600 yards. The older golf courses, the tees, the greens, were very close together. The golf courses built today, they spread them out for real estate purposes.

I think it just takes longer to play. Now, I don’t think that’s good. I think the golf ball is something that brought back — if you bring it back 20 percent, you know, that real will brings it back to about what it was in about 1995 when we played last wound golf ball.

I had dinner with Mike Davis Sunday night, and Mike said, he says, “We’re getting there. We’re going to get there.” He said, “I need your help when we get there”. 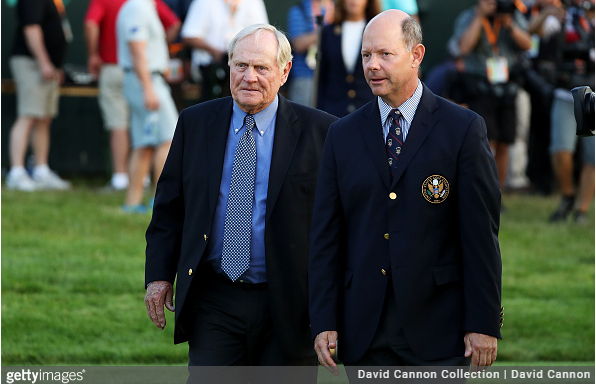 He says, “Oh, no, no, no. We’re not going to do that.” He says, “I think we’re getting closer to agreements with the R&A and be able to do some things and be able to help,” because the R&A has been — sort of doesn’t want to do anything. I’m hoping that’s going to happen. I’ve talked to Mike a lot. Mike’s been very optimistic about wanting to get something done but hasn’t been able to get there yet.

You know, if you look at what happened, there’s three things we have in the game of golf that really causes it to be slow and take longer: And that’s the golf ball, but the golf ball — it’s the length the golf course, the time that we play. The amount of money it costs is a very big detriment to the game because if you have more land and more fertilizer, more water, it costs more money. It costs more to play the game, and the game is pretty difficult.

The guy with the golf ball is going longer than the average golfer. They don’t find half their golf balls. When I was growing up, the best player at the club is the one who kept it down the middle, bumped it up around the green and he’s the guy winning the club championships, and they are playing in about three hours and three hours and ten minutes.

Doesn’t happen today. If the game got back to something like that it would be — and then of course every — I’m rambling, here, I’m sorry guys.

So if the golf ball came back, it would solve I think a lot of those issues, and it would make — it would — I think we only have one golf course in this country, my opinion, that’s not obsolete to the golf ball and that’s Augusta National. They are the only people that have enough money that have been able to keep the golf course and do the things you had to. They are even buying up parts of country clubs and roads and everything else to get that done.

You mentioned ’77 was when you first wanted something done —

NICKLAUS: ’77 was the year that Titleist brought out the big dimpled golf ball and the ball went further, and it went further than anybody else’s ball, by quite a ways.

What were you playing?

NICKLAUS: I was playing MacGregor. But I saw what was happening with it. And then I saw guys, I saw companies trying to change and make different things. I said, Whoops, we’re going to get into a war on how far the golf ball goes. 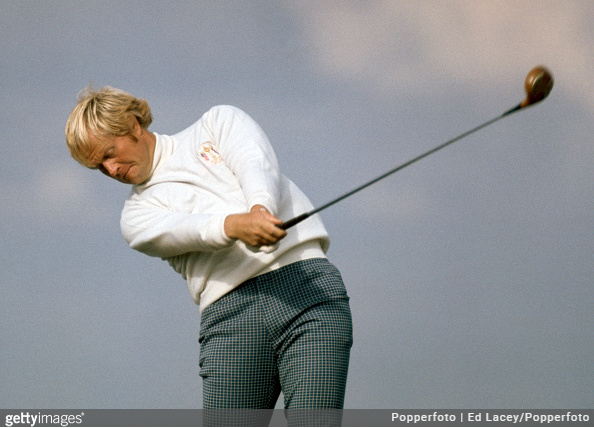 I didn’t think that the game of golf should be dictated by how far a golf ball goes. It’s how well you play the golf ball, not how far you hit it. And even though I was a long hitter, I always enjoyed shorter golf courses, frankly. I thought it took more skill to play them and I thought it was more reward to go work your way around rather than just pounding it out.

I could pound it out obviously a long way because I hit it a long way, but that’s not what I really thought the game of golf was all about.

What did you think when they first came out with metal —

NICKLAUS: Well, when they first came out with the metal drivers, I remember the ’86 Masters, I was playing that little one that Bridgestone came out, that was a Jumbo — trying to remember. It was the Jumbo one or something like that. It was a little tiny head metal driver. It was a good little driver. I tested it against my wooden driver and I didn’t — there was a yard difference.

So when I got to ’86, I used the wood driver. Then they started enlarging the head a little bit and then it started making more sense, because I got a little bit more out of it. But then they got to the mid 90s, that’s when they changed the golf ball and when they changed the golf ball from the wound golf ball to the composite golf ball, that’s when you all of a sudden found out there was a big difference. Because the wood driver didn’t hit it anywhere. 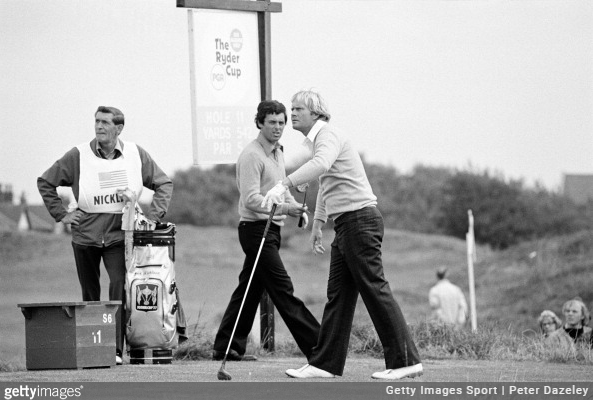 I remember going to open up a lot of golf courses, which I did a lot of times. I would open up a golf course, and I would have a wood driver made and I would sign it and put the date on it and give to them, and I hit the opening tee shot.

I said, okay, guys now I’m going to show you why we don’t use this driver anymore and then I would hit the metal driver and hit it 80 yards past the other one.

So they said, ‘Ohhh, okay, so maybe I ought to give my clubs away.’

I said, ‘No, I don’t think you need to give your clubs away,’ but I said, ‘if you want to learn how to play with modern equipment, you need to get another set of clubs, yeah. That’s what works.’

So that’s what it was.

Good for the economy? 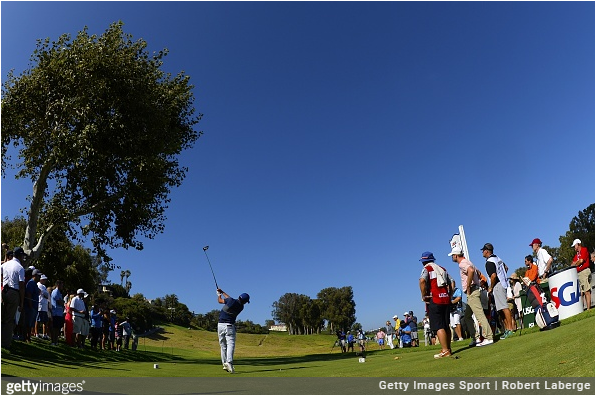 80 percent balls are what we played in 1995 for all intents and purposes. Was that a bad golf ball? No. People played a lot of good golf with that. But you don’t need 7,500 yards to play it.

I say, well you can sell it with a 75 percent golf ball or 70 percent golf ball, and somebody wants to play with a regular golf ball, it’s faster. But I mean, if you have enough — if you have the USGA, which I’ve talked to Mike quite a bit about, get the golf associations around the country to rate courses, then it becomes the manufacturers, and the manufacturers sell a lot more golf balls.

And most people play 90 percent of their golf at one golf course, anyway. If you went to that one golf course with a 70 percent ball and played it, then your friend comes along, fine, go ahead and play. You’ll adjust a handicap adjustment for it, and go play.

I think you can do that. Then you don’t have any obsolete golf courses. Right now we only have one golf course that’s not obsolete, as I said earlier, in my opinion. Maybe, maybe not. I don’t know. USGA was all over that, incidentally. 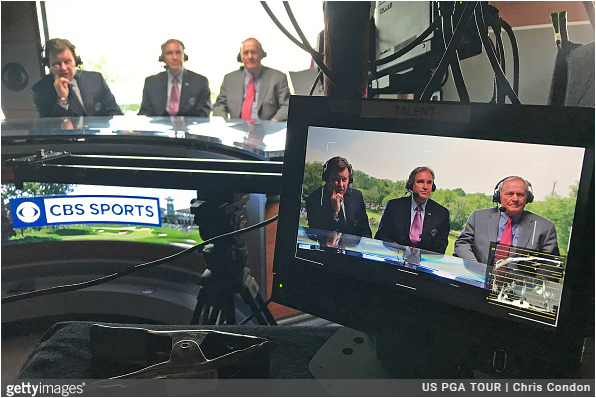 Do you have trouble watching it? Is it slow when you watch it on TV?

NICKLAUS: No, it’s not slow at all when I watch it because I don’t watch it (laughter). I always have a television on but I very rarely ever sit down and watch it. I might watch the last couple holes of a tournament or walk out, “Who’s leading?” That kind of stuff. I keep up with the game and what’s going on but I’m not shot for shot.

With business and golf, and so much is tied to the equipment part of the game. So if you rolled this back or tried to roll it back, you’ll really affecting the equipment manufacturers who have a lot of money in the game?

NICKLAUS: What are you affecting them?

Because they don’t want to roll back.

NICKLAUS: How do you know? Have you asked them?

NICKLAUS: Who did you ask?

Well, you can start with Titleist on down.

NICKLAUS: You can start with Titleist? Anybody else?

NICKLAUS: They were a few years ago.

NICKLAUS: The only manufacturer that had not been is Titleist, and Titleist basically controls the game. Now, there could be others. I’m not saying that — that was just the impression I wanted, but Alex, and Titleist — the other manufacturers, they don’t make the rules of the game. 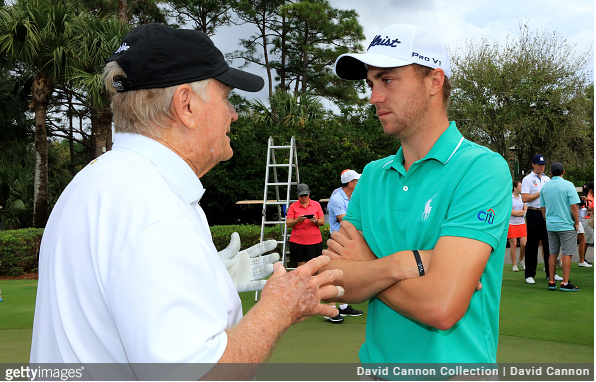 And I don’t understand why Titleist would be against it; I know they are, but I don’t understand why you would be against it. They make probably the best product, and the product — if they make the best product, whether it’s 20 percent shorter, why, what difference would it make? Their market share isn’t going to change a bit. They are still going to dominate the game.

And the growth of the game of golf, it’s not going to grow with the young kids. Young kids don’t have five hours to play golf. Young kids want instant gratification. They want to take their cell phone or iPad, say, you know, I see you’re working on your computer; what’s a computer. You’ve seen that ad? That’s where we area (laughter) still haven’t got your computer yet.

But the game, we need to shorten down the game, reduce the cost of the game and reduce the difficulty for the average guy, not necessarily the pros. But that has to happen.