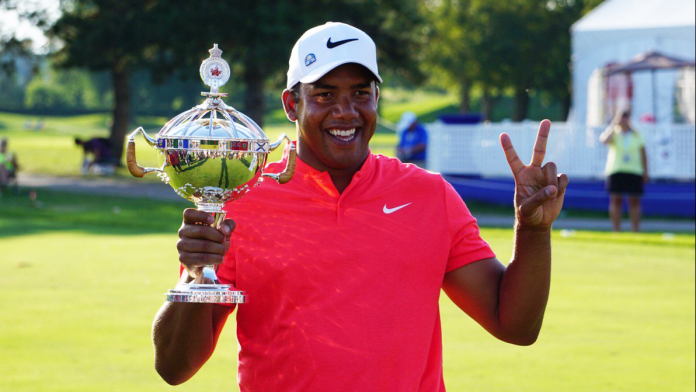 The current Venezuelan ambassador to Canada is a 58-year-old man by the name of Wilmer Omar Barrientos Fernandez. When that man retires, the Venezuelan leadership should consider naming PGA golfer Jhonattan Vegas as his replacement.

After successfully defending his 2016 championship at the RBC Canadian Open, it is clear: Vegas loves Canada, and Canada loves him. Relations between the two countries would never be better.

Familiarity ruled the day at Glen Abbey, as Vegas was able to shake off five consecutive missed cuts to reach 21-under, nine strokes fewer than he had in his 2016 victory, and win on the first playoff hole against Tour veteran Charley Hoffman.

Vegas started the day in a tie for fifth place, but, for the second consecutive year, got into the leader mix early – this time by going out in 5-under 30.

A 2-under 35 on the back nine meant a final round 6-under 65: good enough to make a playoff he would incredibly win. Vegas and Hoffman finished a single stroke ahead of a red-hot Ian Poulter and two ahead of an ice-cold Gary Woodland.

How Vegas Did It

Vegas made eleven of his first 12 cuts to start the 2017 season, but had been a complete mess since missing the cut in April at The Masters – missing eight of his last 10 cuts, including his last five, with finishes of just T34 and T35 in the two made-cuts.

It was clear early in this tournament that despite the recent struggles, Vegas was confident at Glen Abbey as he went 66-69-67 over his first three rounds. He got off to a torrid start in Sunday’s final round with five front-nine birdies.

With three birdies to just one bogey on the back, Vegas posted a low score for the second straight year, and watched as the rest of his competition fell apart.

This time, though, one man was able to face down Vegas after 72 holes: 40-year-old Charley Hoffman. The playoff was short, however.

Both Hoffman and Vegas hit their drives into bunkers on the first playoff hole, which was the 524-yard par-5 18th. Despite hitting the lip of the bunker on his approach shot, Vegas somehow still got the ball to land on the green, which lead to a two-putt for birdie. Hoffman’s attempt at a hole-out birdie missed by an inch, and Vegas became the back-to-back winner.

Vegas led the field in birdies for the week, and was amazing with his putter on Sunday, gaining nearly three strokes on the field on the greens.

What It Means For Vegas

This should go a long way in snapping Vegas out of the terrible slump he has been mired in since April. Vegas’ third career victory means a return trip to Augusta next season, and another year added onto his exemption.

The low round of the day came from a Glen Abbey first timer, who has been in great form as of late: Ian Poulter shot a bogey-free 8-under 64. It is Poulter’s third great recent tournament as he was a runner-up at THE PLAYERS Championship and contended at the Open Championship before finishing T14.

For a man who nearly lost his Tour card earlier this year, he has done a lot to secure it as of late.

Seamus Power, who, along with Padraig Harrington, represented Ireland at the 2016 Summer Olympics, captured his first career PGA Tour top 10 after a final round 66 that included birdies on five of his last six holes.

The first finish inside the top 35 since February was the result for Gary Woodland after a fantastic week at Glen Abbey. Woodland charged the lead late in his round, but, after a final round 4-under 68, finished in solo-fourth place.

Kevin Chappell played in the final group with Charley Hoffman on Sunday, and while he looked great at times, he was unable to avoid mistakes, as four bogeys led to a disappointing final round 1-under 71.

Sam Saunders was an object of attention, being the grandson of Arnold Palmer on Arnold Palmer Day. He was in the mix after birdies on three of his first six holes, but followed up a bogey-free front nine with five back-nine bogeys.

Saunders shot an even-par 72 to drop 14 spots down the leaderboard for a T19 finish.

Ryan Ruffels had an incredible finish, carding eagle-birdie-birdie over his final three holes. Unfortunatley, for Ruffels, he was +8 over his first 15 holes, and a 4-over 76 was tied for the second-worst in the Sunday field.

The fervent, always-enormous Canadian crowd has been waiting a long time for one of their own to take the Canadian Open, something that has not happened since Pat Fletcher did it all the way back in 1954.

There was hope coming into the week, with 13 of Canada’s best in the field, but it did not go as the leafers hoped, as only two of them made the cut.

Neither of those two were in contention either, with Mackenzie Hughes finishing as low Canadian at T32. The other to make the cut was Graham DeLaet, who struggled to a 73-71 weekend to finish T48.

Among the notables to miss the cut were Weir, Hearn, Nick Taylor, du Toit, and Adam Hadwin.

“It’s incredible. It’s a lot of fun, winning, especially in Canada, it doesn’t get any better. I’ve been coming off a really long stretch of five missed cuts, not playing great golf, but I did a little bit of a change with my irons this week, and it was magic, to be honest. It’s fun, it’s always fun winning, especially in a crowd like this that has always been fun to me, so I’m just really enjoying the moment.”
–Jhonattan Vegas, 2016 & 2017 RBC Canadian Open Champion