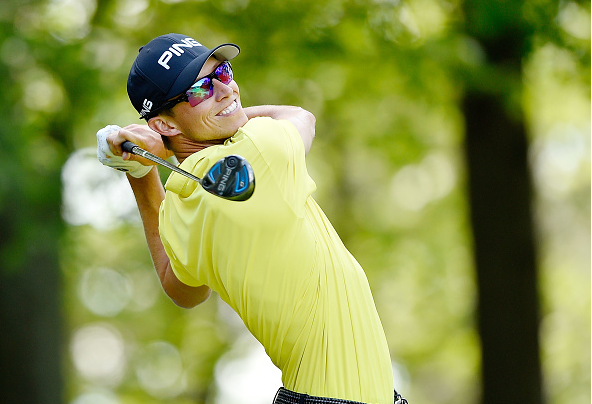 It was a busy week in professional golf for nearly every professional tour, with the PGA in Canada, the LGPA in Scotland, the European Tour in Germany, the Web.com Tour in Kansas, and the Champions Tour in Wales.

With golf being the ultimate “sport that looks easier than it is”, everyone has that delusional friend who claims they can do something just as good, if not better, than the golf they see on TV.

Thanks to 50-year-old American golfer Mike Heinen, for at least one instance, that annoying friend might be right. At this past weekend’s Senior Open Championship, Heinen had a Friday that would have made Charles Barkley blush.

In his Champions Tour debut, Heinen flew back to his Louisiana home after an unfathomably bad +37 two-round performance, highlighted by a second round 96(!) where he hit just one fairway, and shot 50 on the back nine.

An amazing aspect of this performance is that Heinen is not some nobody who just got lucky in Open qualifying; he had 212 PGA starts in his 20+ year golf career, and won the 1994 Shell Houston Open.

For 69 holes at the Ladies Scottish Open, it was a blast from the past as LPGA legend Karrie Webb was on her way to her first win in over three years, and her 42nd LPGA win overall.

The 42-year-old Webb then imploded missing a short par putt on 16 and then carding a double-bogey 6 on the par-5 17th. A birdie on 18 was not enough as she ended up losing by one stroke to Mi Hyang Lee.

After the round, Webb criticized the lack of scoreboards at Dundonald Links, saying that she did not know where she stood on the par-5 18th hole.

China is the world’s most populous nation, but they are not known for being a golf-friendly one. Former Communist China Party Leader Mao Zedong banned the sport in the late 1940s believing that it operated contrary to Communist ideals, leading to at least one recent generation that never even had the option to play.

The sport grew steadily after the ban was lifted by Deng Xiaoping’s administration roughly 30 years later, but it has encountered other problems in recent years. New course construction was banned in 2004 and in January of 2017, 111 national courses were shut down for water conservation.

While the future for golf in China is uncertain, recent performances from Chinese golfers on professional circuits have been extremely encouraging, which could help lift their international profile.

At The Open Championship, less than two weeks ago, 21-year-old Hao-Tong Li shot a final round 63 to finish in a tie for third place.

Showing that it may not be a flukish occurrence, 20-year-old Zecheng Dou, who goes my the name “Marty,” won the Web.com Tour’s Digital Ally Open and became the first Chinese-born golfer to earn a PGA Tour card.

The tournament started a day late due to poor weather, forcing players to go 36 holes on Sunday, an environment Dou was able to thrive in, shooting a 61-66 over the weekend (rounds 3 and 4), both bogey-free, to reach 25-under for the tournament, and win by three strokes.

In addition, China also had another golfer in the top 10, as Xinjun Zhang finished T8, rising 50 spots on Sunday after posting 64-64.

Andrew Loupe, a 28-year-old bomber, has had a nightmare 4th season on the PGA Tour, making just seven cuts in 20 events, with just one finish inside the top 30.

However, things seem to be trending slightly up for Loupe, as he made his third straight cut at the RBC Canadian Open. While the T62 finish might not be cause for celebration, Loupe is finally doing something he has not done all year: play consistently.

Loupe has been unbelievably wild from round to round. Here are just a few examples of how much his scores have fluctuated:

Loupe’s season has been “one step forward, two steps back” all season, but he should take solace in the fact that at the Canadian Open, he shot 70-70-71-72. He has an uphill battle to keep PGA status for next year, but perhaps this is a sign that better results are on the way.

Morgan Pressel has an impressive Solheim Cup history for someone who is just 29 years old, as she has made five teams and has amassed a 10-7-2 record.

Unfortunately, 2017 struggles have her way back in the Solheim Cup standings, and she needed a tremendous week in Scotland to get back onto the mind of American captain Julie Inkster.

Pressel responded with a 76-81 weekend that left her in a tie for 72nd place. She currently looks unlikely to make the team, especially considering that she is not qualified for next week’s RICOH Women’s British Open.

Pressel’s veteran presence would be an enormous asset to a downtrodden American team, but she has done little to make herself deserving of a spot.

As big as winning his second straight RBC Canadian Open was for the previously struggling Jhonattan Vegas, it was also very big for Brandon Hagy and Seamus Power, two PGA Tour rookies who posted their first career top 10 finish at Glen Abbey.

The 26-year-old Hagy rode a first round 65 to a T5 finish, breaking 70 in all four rounds. Hagy, who is ranked No. 2 on Tour in driving distance, greatly improved his chances of making the FedEx Cup playoffs with his high finish, jumping from 129 to 108 in the standings.

Power, a 30-year-old who represented Ireland at the 2016 Olympics, got hot down the stretch at Glen Abbey, turning five birdies over his last six holes into a T10 finish. It is a third straight top-25 finish for Power, who now sits 126th in the FedEx Cup Standings, with the top 125 making the playoffs.

Down: Canadians at Their Home Open

The RBC Canadian Open is one of the biggest celebrations of the year, as Canada shows up in droves to support their own at the PGA’s only event in the Great White North.

Unfortunately, the Canadian golf contingency has not held up their end, as the last native to win was Pat Fletcher in 1954. This looked like Canada’s best chance in years to break through, but of the 13 they had in the field, only two even made the cut.

Adam Hadwin is Canada’s highest ranked player (by far) at No. 56 in the world, but after opening with a 3-over 75, he missed the cut by four strokes. There was hope that a weak field in his home country could be what Hadwin needed to get out of his recent funk, but that clearly did not happen.

Nick Taylor and David Hearn also missed the cut as did Jared du Toit, who played in the final Sunday grouping as a 21-year-old amateur last season. A 7-over six-hole Friday stretch doomed du Toit, who posted 71-79. The low Canadian at Glen Abbey was PGA Tour rookie Mackenzie Hughes, who finished T32.

Up: Fans of Smooooooth Jazz

Long considered one of the most eligible bachelors in professional sports, Sergio Garcia is officially off the market, as he married fiancée Angela Akins in an opulent Texas affair on Saturday.

The 37-year-old Spaniard, and reigning Masters Champion, held his wedding in style, and those fortunate enough to score an invitation were treated to something incredible: the silky smooth, contemporary tones of saxophone legend Kenny G, who played the reception.

We do not know if he played “Songbird” (he did in the version of the reception that I dreamed up), but the bride did capture a clip of the magical performance, which she posted to her Instagram account @theangelaakins.