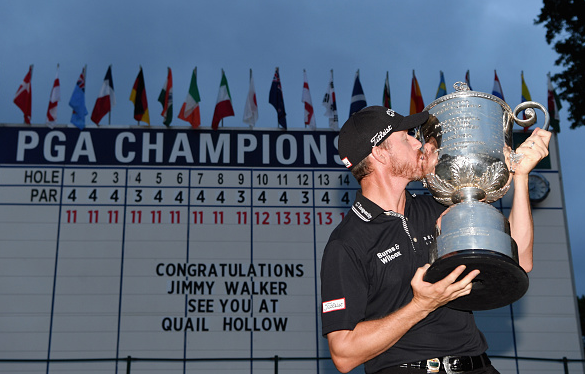 After three rounds at the PGA Championship, Jimmy Walker was the leader by one, but with no majors and both Jason Day and Henrik Stenson nipping right at his heels, he was facing a different kind of pressure than he had ever faced before.

The 37-year-old Texan proved to be unflappable, shooting a bogey-free 68, and finishing one stroke ahead of Day to win his first major. Walker’s wire-to-wire victory meant a sweep for first-timer major winners (Willett, D. Johnson, Stenson), for the major season.

For the most part, weather has not played a big role in the major season. Baltrusol, however, was not as fortunate.

Thunderstorms on Saturday meant that half the field had to play 36 holes on Sunday. They were forced to play round 4 without re-pairing, which meant Walker and Robert Streb were the final group for both rounds. They were even forced to play preferred lies, which is basically unheard of in major championship history. These conditions took a lot of players off their games, but Walker was not one of them.

Walker led all the way through round four, but Day nailed a putt for eagle while Walker was standing over his second shot at 18. It meant just a one-stroke lead for Walker, and he would only need a par on the par-5 to capture his first major title. His next shot sliced off to the right, sailing into the rough, the first time all day he showed any shaky nerves. However, he was able to pitch out onto the green, and then two-putted for his par and the win.

If Walker was nervous early on, he did not show it. He parred the entire front nine. He then holed-in for birdie from the sand on 10, and followed that up with another birdie on 11. From there he mostly coasted, playing the final seven holes one-under.

Off the tees, Walker was not super long or accurate (63rd in distance, 43rd in accuracy), but he was brilliant everywhere else, hitting 81.4% of his greens over the last three rounds, and his putting was unbelievable.

What It Means For Walker

The win is certainly huge for his legacy. Walker famously went 187 Tour events before winning for the first time. He then went on to win three of his next eight. Next year, we will get to see how he performs in majors now that he is a major champion.

Walker was not having his best season, with no top-10s since early March, and he wasn’t a factor in the first three majors. With this victory, he soars to 14th in the FedEx Cup rankings, and even better, he is a virtual lock to make the U.S. Ryder Cup team.

Daniel Summerhays suddenly became relevant late in the day with a back nine surge of 32, leading to a 4-under 66. Summerhays finished second in the field in strokes gained: putting. It was his second major top-10 this season, as he posted a T8 at The U.S. Open. Strangely, those are his only top-10s on the season. As a result of the high finish, he will play in his first Masters next season. Two European Tour regulars Soren Kjeldsen, the dane who spent considerable time on the leaderboard at The Open Championship, and Dutchman Joost Luiten tied for the best round of the day, a five-under 65. They both finished -3 for the tournament, good for a T33.

Not Their Best Effort

Lee Westwood again appeared to be allergic to major weekends, shooting a field-high five-over 75. He finished in 85th place. That makes yet another majorless season for the 43-year-old Englishman, who may not have many chances left. Aussie Marc Leishman shot a 67 in the third round to give himself a prayer if he could be the latest to shoot 63 or the first to shoot 62. He got nothing going, finishing with a birdie-free round of 74, which included a bogey at both the par-5 17th and par-5 18th.

To Re-pair or Not?

After play was suspended on Saturday, the PGA decided it would be best to keep the same pairings in round four as round three. To their credit, it did help get the tournament finished on time, but it is also a decision that will leave many others thinking “what if?”. Everyone saw how Henrik Stenson and Phil Mickelson were playing off each other at Royal Troon; one would make an awe-inspiring shot, and then the other would respond with an even better shot. Deciding not to re-pair put one guy in each of the last two groups who were non-factors going into the final round: Robert Streb with Walker in the final group, and Emiliano Grillo with Day in the penultimate pairing.

One year after posting one of the greatest single-season runs of majors, Jordan Spieth shot a final-round 68 to finish his tournament at -6. Last year, he won The Masters and The U.S. Open, finished one stroke out a playoff at The Open Championship, and finished solo-second at The PGA Championship (1,1,T4,2). This year? T2-T37-T30-T12. Not an awful season by any means, but not what most thought we would see after what he did last year. It leaves everyone to wonder how much the disaster on #12 at The Masters really affected him.

“I was thinking up 17 if I could birdie, I think that would put it out. We made birdie. Sometimes things don’t come easy and golf is not an easy game and Jason (Day) is a true champion. I wouldn’t expect anything less, an eagle at the last, that’s unreal. So that really put it on me to make par. Sometimes pars are hard, but we got it!” – PGA Champion Jimmy Walker