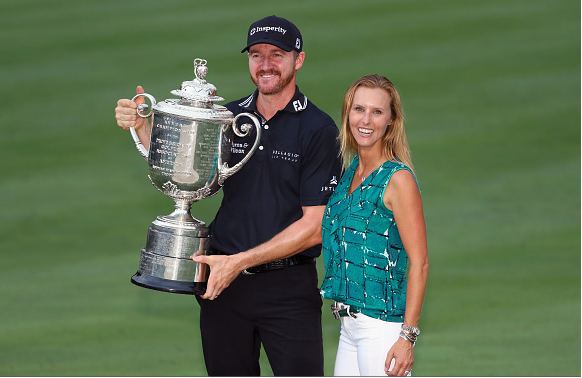 Jimmy Walker fired a 3-under 67 at Baltusrol on Sunday to win the PGA Championship – his first major. Jason Day, the winner in 2015, also shot a 3-under and finished alone in second place.

Here’s a round up of quotes and photos from some of the more notable players, following the final round.

“It’s surreal. I mean, it really is. I would have said it would have happened the last couple years, the way I was playing. I just had not quite played as well as I would have liked to this year but I knew it was close. Felt some things were clicking last week. God, just to be in it and be there and have a chance and then to finish it off is just — it’s so gratifying. I mean, it really is. Everything I’ve done up to this point, helped this happen… I heard Jason. I thought what — I’m pretty sure it wasn’t Grillo that hit the shot that everybody was so pumped about. I figured it was Jason. I heard him hit the driver and I heard everybody was pumped, because he pumped one, I guess. And then I heard the second roar. So I knew I needed to make that putt, and I did, and then made the 5 on the last. Made it a little tougher but it was awesome.”
-Jimmy Walker, 1st at -14

“I didn’t know he had taken a three-shot advantage. I didn’t know if he holed the putt before my shot or after my shot because I didn’t hear anything really. All I knew was that I assumed I was only two shots back going into 18. I think I was a little disappointed with the putt on 17. I really read it to go left-to-right and it went dead straight. I hit a good putt. Just can’t do anything other than hit a good putt; unfortunately didn’t… It was nice to get the eagle, just to try and make Jimmy think about it, but obviously Jimmy just played too good all day. The birdie on 17 was key for him. I know exactly how Jimmy feels, because I did exactly that last year. So it was actually quite nice to be able to see him celebrate with his family and friends there. I know exactly that feeling, and he’s a very deserving winner. So hats off, because I mean, it’s not easy to win tournaments, and he controlled himself pretty darn well all day. So you know, once again, very happy with the defense. But at the end of the day, it wasn’t good enough.”
-Jason Day, 2nd at -13

“It was nice. Obviously today was a bit tough walking 36, ground is wet. It’s not — it wasn’t ideal for my ankle, but you’ve got to do it. We still played pretty well considering where we were on Tuesday, Monday Tuesday. It’s fine… It comes along. You play well here, everything is going to take care of itself. It’s one of those things. I wanted to win, I didn’t do that. At the same time, you’ve got to look back and realize you played well here, so obviously it’s going to take care of itself when it comes to Ryder Cup.”
-Brooks Koepka, T4 at -9

“I hit the ball well enough over the 36 holes to really make a run off things and just couldn’t quite get it in the hole on the greens… Pretty strange, but The Open was the same way. Just waiting for it all to click. I believe it will soon. I’ve been putting a lot of time into the rest of my game and maybe that’s kind of shifted a little from the short game and maybe I just shift it back that way. Again, can’t really complain much about it. I missed some short putts this week and really couldn’t get any momentum from the midrange game, but I’m really, really happy with the way that we’re striking the ball.”
-Jordan Spieth, T12 at -6

“Certainly the play this year at the British tells me that I’m able to play at a high level. I’m starting to see my game come back. I’m starting to hit the shots again, what I’m visualizing, what I’m seeing and doing it with ease now. I get to the first tee and I just kind of tighten up and start to force the issue and don’t just go out and play. I have to work on that for these coming FedExCup events. I’m excited about where my game is.”
-Phil Mickelson, T33 at -3

“It was a long day. I never felt like I brought my A game. I was struggling most of the day. I think I hit more poor shots in the two rounds today than in the previous six or several rounds combined. I didn’t bring my game and I didn’t make a putt all day, I felt like. Despite that, I thought I was hanging good. I was trying to push, which I had to. I was two or three behind coming into the last five or six holes. Just winged it over a lot, which was funny enough, probably the best shot of the day, little three-quarter 9-iron, I just overcooked it and went long and I made double and that was the end of it for me.”
-Henrik Stenson, T7 at -8