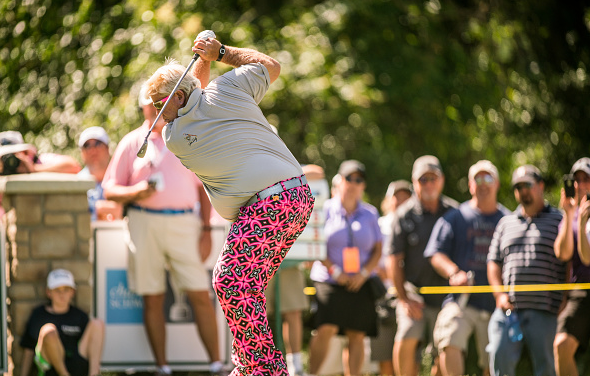 Following a bogey-free 7-under 65 at The Woodlands on Saturday, John Daly has moved into the 36-hole lead at the Insperity Invitational. The 51-year-old Daly is 11-under for the tournament and leads Kenny Perry by one and Jerry Smith by two.

Rounding out the top-5 is Tommy Armour III, who is at 8-under, and Miguel Angel Jimenez, who posted a 6-under 66 to get to 7-under.

Daly takes the solo lead on the par-3 16th. The two-time major champion hit a sweet tee shot then made a clutch put.

John Daly is having himself a good day in Houston. He holds the 1-shot lead @InsperityInvtnl. pic.twitter.com/lb6eJbBfhe

“It’s not a familiar place I’m in. It’s going to be great. So I’m just going to kind of get a little more aggressive like I have been this week.”
–John Daly, on strategy for Sunday’s final round.

Is John Daly the Best Dressed Golfer on the PGA Tour?