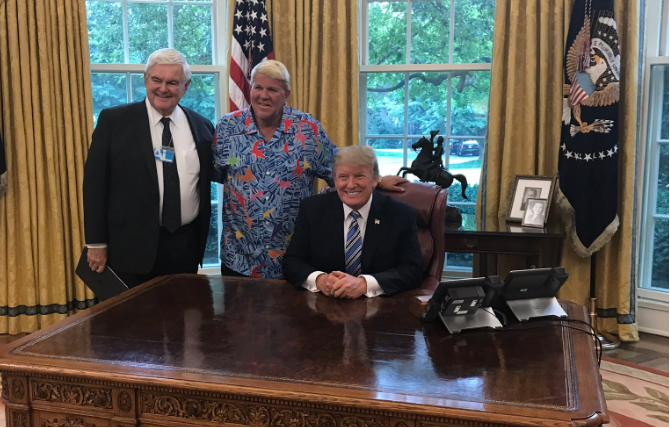 Despite John Daly being an Arkansas Razorback, home of the Clintons, the two-time major winner has been a longtime friend and backer of President Donald J. Trump.

In town for the Constellation Senior PLAYERS Championship in nearby Baltimore, Daly got an invite by the new president to visit the White House.

The recent winner of the Insperity Invitational showed up in the Oval Office wearing classic Daly threads, and took some photos with his family and the 45th POTUS.

Daly tweeted, “Great day at the White House seeing one of my great friends @realDonaldTrump whose making America great again!”

Great Day at the White House seeing one of my grt friends @realDonaldTrump whose Making America Great Again! #POTUS ??? pic.twitter.com/Gnlx9lxMj6

Daly also had a snapshot taken with Newt Gingrich, and even plugged the former Speaker’s new book, a #1Seller.

Great to also see the Speaker of the House walk in @newtgingrich & Author of New York Times #1Seller #UnderstandingTrump ??? pic.twitter.com/sKDo3iow4u