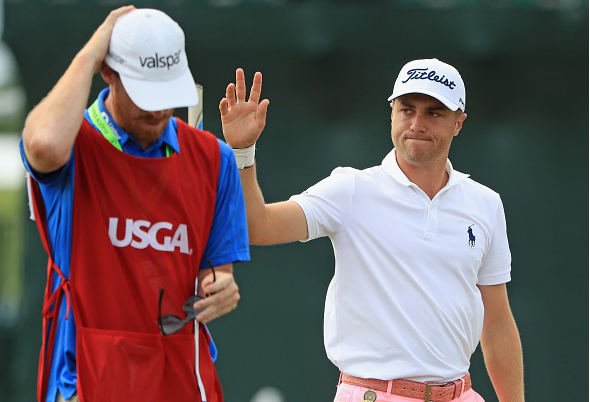 The 24-year-old started the day at just 2-under (T24), but after a 5-under front-nine, which included six birdies and a bogey, Thomas made his presence known on the leaderboard.

His back nine started somewhat slow with a bogey and birdie (even-par through 5 holes). But then Thomas got white-hot, starting with a birdie on 15, quickly followed by another one on 17.

Thomas, the 13th ranked player in the world, who already has three wins on the PGA Tour season, capped off his record-breaking round with an eagle on 18.

Thomas is at 11-under for the tournament, and holds the clubhouse lead after 54-holes.

After his round, Thomas was asked what he’ll say to Johnny Miller.

“I don’t know, but I’ll be happy,” said Thomas. “Wish he was calling it, to hear what he would’ve said.”

Update: Miller has checked in. In classic Johnny Miller form.

Talked to Johnny. "9 under is incredible with #USOpen pressure, but it isn't a US Open course that I'm familiar with the way it was set up."

Making a 3 on a 670 yard hole to shoot 63 in the U.S. Open and shutting up Johnny Miller should get you diplomatic immunity.

Somewhere Johnny Miller is thinking, I would've shot 59 at this joint #ErinHills #USOpen

Johnny Miller saying how much easier Erin Hills is compared to Oakmont in 3,2,1……#UsOpen

The Historic Round Recap

Here’s a video clip of JT’s historic highlights in under three minutes.

A three-minute recap of @JustinThomas34's record-setting 63 at the #USOpen. pic.twitter.com/tTAktO4eXw

ESPN Stats confirms that Thomas’s 63 is the “lowest score-to-par in U.S. Open history.

Justin Thomas eagles 18 to finish the day with a 9-under 63!

It's the lowest score-to-par in any round at the #USOpen. pic.twitter.com/xELi7LIHTx

According to ESPN Stats: “Of the 31 times someone has shot 63 in a major championship, only seven of those times has the player gone on to win that major, most recently Henrik Stenson at Royal Troon last year in the Open Championship.”

Thomas finished his round 31-32-63, with nine birdies, six pars, two bogeys, and one historic eagle.

One of the great Major rounds ??

Justin Thomas becomes the first player to shoot nine under par in a #USOpen round. pic.twitter.com/Cx867SJNs0

Some of his contemporaries have congratulated Thomas via Twitter.

That shot @JustinThomas34 just hit on 18 is ridiculous. That pins hard enough with a wedge. #usopen

No better feeling in golf than standing over the ball & knowing you are going stripe every shot & hole every putt – great playing JT ?? #63

Here’s a handful of photos from Getty Images of Justin Thomas during round three at Erin Hills.