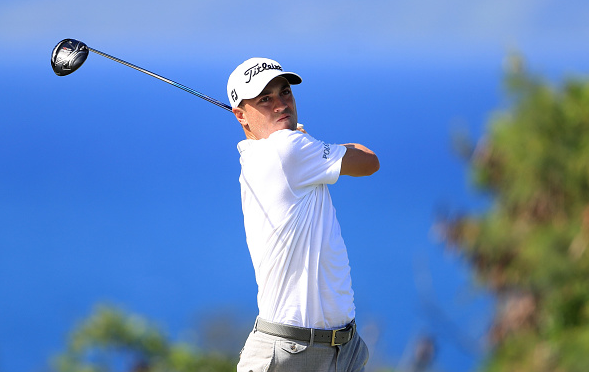 Justin Thomas shot his third straight round of 6-under-par 67 on Saturday, and leads the SBS Tournament of Champions after three rounds at Kapalua.

The 23-year-old American sits at 18-under through 54 holes, two-strokes better than 24 year-old Hideki Matsuyama of Japan – arguably the hottest golfer in the world at the moment.

The two young rising stars will be paired together in Sunday’s final pairing.

In a third place tie at -14, four strokes behind Thomas, is the trio of William McGirt, Ryan Moore, and PGA Champion Jimmy Walker.

For the second straight day, Thomas got his round into gear by feasting on holes 3, 4, and 5, with birdies (again) on all three.

The Alabama alum went quiet mid-round, playing 6-11 at +1, but erupted again down the stretch with birdies on 12 and 18, and an eagle 2 on the par 4 14th after driving the green.

Thomas was, again, both long and accurate on Saturday, averaging 319.3 yards off the tee (with a monstrous high of 404 yards), and hitting 15 of 18 greens.

William McGirt, playing in his first Tournament of Champions, by virtue of winning the 2016 Memorial Tournament, tied with Matsuyama for the low round on Saturday, a 7-under 66.

McGirt wasn’t talked about much going into the week, as he’s been inconsistent since a T10 at the PGA Championship, but on Saturday he was bogey-free for the second straight day.

Like Thomas, Brendan Steele has also gone 67-67 over the past two days, but when factoring in his opening-round 72, the winner of this fall’s Safeway Open is five shots back. Steele, like McGirt, carded a clean 18, with 6 birdies to go along with 12 pars.

Russell Knox, who won twice during the 2015-16 season, made his presence known to the field for the first time this week, carding a 5-under 68. He is tied for 8th place, 7-strokes behind Thomas. Knox will need to do even better to notch his first win of the new season.

Patrick Reed had the round of the tournament on Friday, an 8-under 65 that moved him into third place. He continued his tear early into the third round with three birdies over his first six holes.

From there, however, he struggled badly (especially for this course), with three bogeys against one birdie.

And with a finish of just 1-under 72, Reed is probably too far back to reasonably expect a win. Also hurting his chances down the stretch was his playing partner Jason Dufner, who played his last five holes 2-over to match Reed’s 72.

Ryan Moore, who like Thomas, went 67-67 in his first two rounds, seemed to be matching Thomas shot-for-shot most of the day, but lost some momentum on the back nine, playing his final six holes at 1-over.

At -14 for the tournament, only 4-strokes back, Moore is not done by any stretch. But if he does come up a stroke or two short on Sunday, he will look back on that stretch of holes as a lost opportunity.

“It was a good day scorewise. It could have been a lot lower, but that’s golf, you can always say it could be lower. I played well tee-to-green, but for some reason, wasn’t as comfortable with the putter today; even some of the putts I hit well didn’t go in, but I’m in a great spot going into tomorrow, so I can’t complain.”
–Justin Thomas, third round leader.