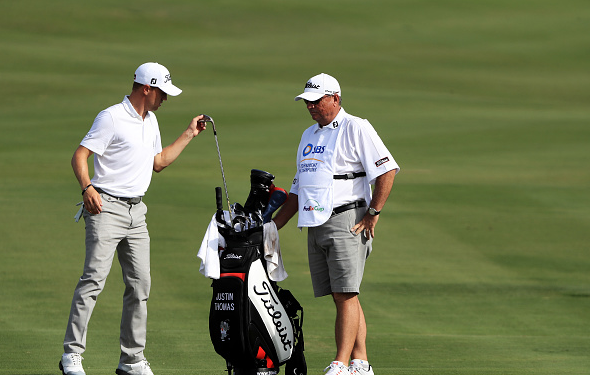 The 23 year-old Thomas will be paired with Hideki Matsuyama, who himself is red-hot – having won 4 of the last 5 events he’s entered.

In fact, Thomas, at the CIMB Classic back in October, is the only player to have beaten Matsuyama this season. How’s that as a promo lead-in for Sunday’s final showdown!?

After his sizzling round, Thomas took questions from the press, moderated by the PGA Tour’s Alex Urban.

Here are the three best – which focus on his burgeoning rivalry with Hideki, the physics behind his surprising power, and some predictions on his beloved Alabama football team.

Since THE TOUR Championship, you’re the only player to have beaten Hideki in a field he’s in. You get another chance to do it again. Starting a little rivalry there maybe?

THOMAS: Yeah, if I’m near Hideki in the tournament, that’s usually probably a pretty good thing on Sunday. He’s obviously a tremendous player and he’s on an unbelievable run here the last five events.

I actually had no idea I was the only one to beat him, until I saw Doug Tweeted or something, that I was the only person that beat him in the last five events, which is absurd; the fact that he’s won four of his last five.

Yeah, it’s good, and he’s a great player but there’s a lot of other great players out there. I just need to go take care of my job.

What’s your understanding of — and what I guess are the physics of where you get all that power?

THOMAS: I have no clue. I’ve been told I use the ground well. The fact that I’m probably almost in the air when I make contact probably doesn’t hurt anything. Kind of why I wear metal spikes, because I need all the support I can get to not flip.

What are your plans for Monday night to watch the game, and would a win by you tomorrow be a good sign going into the National Championship game?

THOMAS: I’m sure Coach Saban is really following me along to make sure (laughter).

I don’t know, I’m already a little nervous, but I’ll be really nervous come Monday. But I’m confident in the Tide and I think with the preparation that they are doing, they will be okay if they play well and do what they need to do.

I’ll probably just watch it, same place I did last year. Just a place in Waikiki. I’ve got some guys playing, Trey Mullinax and Bud Cauley, they are buddies of mine that went to ‘Bama, so it will be pretty rowdy.