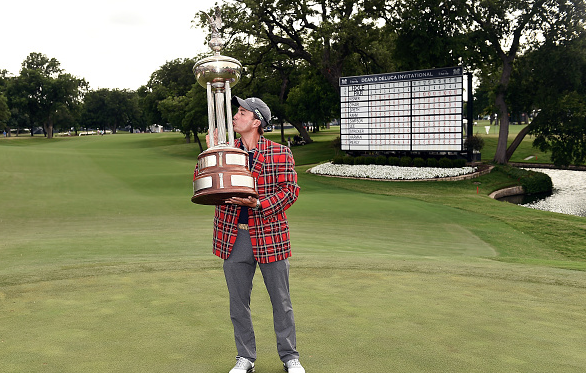 Apologies to Indy Car Racer Takuma Sato, but the fastest finish on Sunday did not happen in Indianapolis, it happened in Fort Worth, Texas.

Starting the day three strokes behind 54-hole leader Webb Simpson, Kisner got hot early on the back nine, and then made some clutch shots down the stretch to finish at 4-under 66 (10-under for the tournament), and win by a single stroke over the intimidating trio of defending champion Jordan Spieth, Sean O’Hair, and Jon Rahm.

Carding par or better on 67 of 72 holes for the week, Kisner captured his second career PGA Tour title.

How Kisner Did It

Kevin Kisner has had his share of close calls this year, finishing runner-up at the Arnold Palmer Invitational and the Zurich Classic, as well as three additional finishes of T11 or better. He was determined to not let the Dean & DeLuca become another “almost” victory.

In fourth place to start the day, three strokes behind Webb Simpson, Kisner got the start he wanted when he birdied the par-5 1st hole. He was quiet on the rest of his front nine, with a birdie, a bogey, and six pars, but was able to stay near the lead.

Then at the turn, Kisner made his move. He birdied 10, 11, and 12, and took a two-stroke lead when he added another birdie on 15. A bogey on 16 dropped him back to -10, and brought the crowd back within a shot, but a par-par finish was just enough to avoid a playoff.

Jon Rahm had the best chance of forcing extra holes, but his 12-foot birdie attempt on 18 narrowly missed.

What It Means For Kisner

The Dean & DeLuca title is the second win of Kisner’s PGA Tour career, with his first victory coming at last season’s (2015-16) RSM Classic.

While Kisner has been consistently good this season, he was coming off a poor two-week stretch where he missed the cut at the Wells Fargo and finished T56 at THE PLAYERS. He was clearly able to put that behind him in Fort Worth, and moved to No. 7 in the FedEx Cup as he continues to assert himself as one of the best shot-makers on Tour.

In one of the more interesting streaks on Tour, nobody has successfully defended at Hogan’s Alley since Ben Hogan himself did it in 1953.

With a bogey free 5-under 65, Jordan Spieth nearly took his second Dean & DeLuca in a row, settling for a runner-up finish.

In his 2016 victory, Spieth finished birdie-birdie-birdie, but this year it was par-par-par.

The two-time major winner led the field in birdies, and was tremendous on the green, looking sharp with the Scotty Cameron putter that he had used since he was 15. He made news when he briefly switched to a new putter after missing the cut at THE PLAYERS two weeks ago, but that affair was short-lived. The T2 is very encouraging for Spieth, given that he had missed his last two cuts.

Jon Rahm has been nothing short of incredible in his first full year on Tour, with a win and four other top-5 finishes coming into the week.

The 22-year-old phenom was at it again at Colonial, putting on a Sunday driving clinic that nearly got him win No. 2 of the season. Rahm matched Kisner’s final round, posting a 4-under 66, but finishing runner-up.

One man who cannot be compared to Rahm is 50-year-old Tour vet Steve Stricker, but the 2009 Dean & DeLuca winner had the round of the day on Sunday.

Stricker played his front nine to a bogey-free 5-under 30.

The Wisconsin native cooled off down the stretch, however, playing the final four holes to 1-over, but it was still good enough for a 7-under 63, and the low round of the tournament.

The 6-under (T7) finish Stricker’s first top 10 in seven starts this season.

One player who REALLY needed something positive to happen was Scott Piercy. After a breakthrough 2016 season which included high-profile runner-ups at the U.S. Open and the WGC-Bridgestone Invitational, Piercy was expected to be a leaderboard regular in 2017.

Things may be trending the right direction again for Piercy, however, as he shot a final-round 68 for a T7 finish. Piercy’s only real struggles at Colonial occurred on one hole, as he played No. 13 to 5-over for the week. Outside of that hole, he was one of the best in the field.

For the third consecutive tournament, following his victory at The Masters, Sergio Garcia has played well enough to be in contention through three rounds, only to play poorly on Sunday.

This Sunday was not as bad as his past two final rounds, but he never threatened the leaders on Sunday, shooting a 1-over 71 which included just two birdies, and finishing in a tie for 13th.

Matching Sergio’s 71 was 54-hole leader Webb Simpson who had just one birdie in his final round. Simpson was the last man in the field with a shot at catching Kisner when he stood on the 18th tee, and just one stroke back. A poor second shot led to a bogey, and a solo-fifth finish.

Paul Casey was in the final group with Simpson, and was even worse, as a 3-over 73 dropped the Englishman from second to 10th.

“I’m just honored to be the champion here and to come back every year and see my name on that wall is something special and I’m just happy to win, any tournament, but especially here. I love this place.”
–Kevin Kisner, 2017 Dean & DeLuca Champion