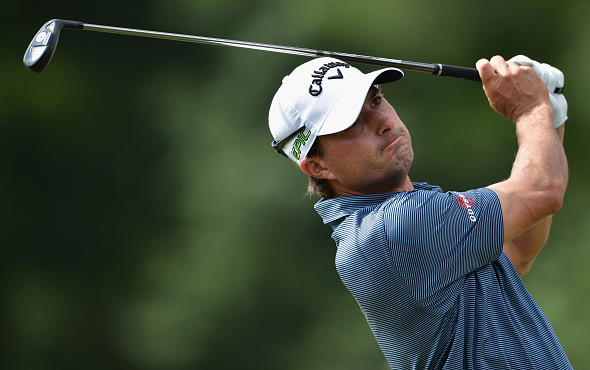 It was a slow third round at the PGA Championship. Perhaps excruciatingly so. Friday’s weather delay necessitated Saturday threesomes and an extremely difficult course set-up had one player after another stuck in some kind of trouble, creating a bottleneck effect that greatly slowed Quail Hollow’s pace of play. 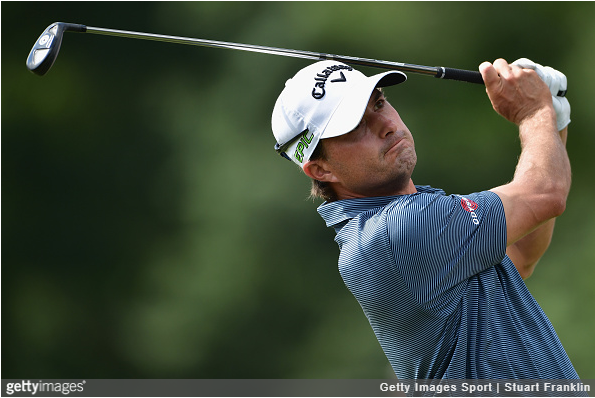 It was slow, it was tough, and it was exhausting, but all the carnage of the third day, largely executed by the “Green Mile” closing stretch, brought the field nearly back to where it started: with Kevin Kisner out front.

Kisner has never had a top 10 in a major before, but after a modest third round 1-over 72, Kisner might just be 18 holes away from #1.

The Bermuda grass wizard holds a one-stroke 54-hole lead at the PGA Championship over a surprising Chris Stroud and a finally-tamed Hideki Matsuyama.

Kevin Kisner was unable to post his third straight four-under 67, but his 1-over 71 was just enough to again maintain the lead. 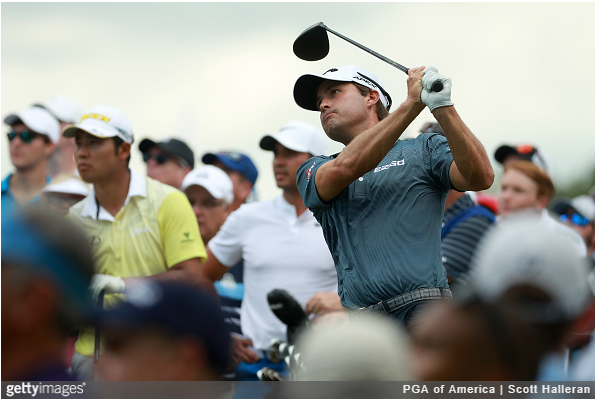 Kisner played his front nine in bogey-free 1-under, and after back-to-back birdies on 14 and 15, he reached -2 for the day and -10 for the tournament.

Kisner then found himself among the cavalcade that struggled to figure out the “Green Mile”, carding a double on 16 and another bogey on 18, leading to the 72. His 12 greens in regulation where three fewer than he had in each of the first two rounds, but Kisner still leads the field for the week.

Chris Stroud, who won just last week at the opposite-field Barracuda Championship, his first career victory after 290 career starts, tied Kisner’s lead late, but he too, fell victim to the Green Mile, finishing bogey-bogey and ending the day one out of the lead.

Kisner and Stroud will be playing in tomorrow’s final pairing.

With Saturday playing in threesomes, 2015 PGA Champion and 2016 runner-up Jason Day founding himself in the final pairing today. 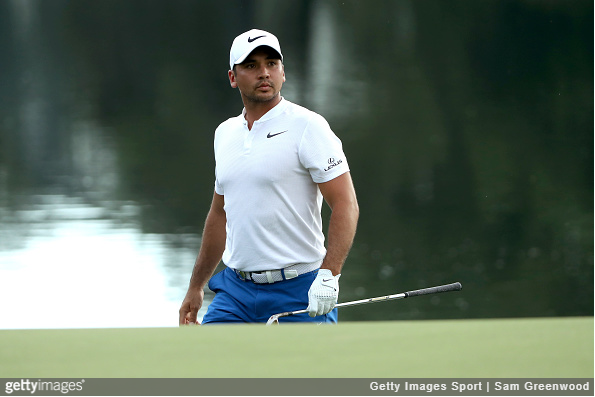 After his Green Mile nightmare, however, he will not be anywhere near that final pairing tomorrow. After a double bogey, bogey stretch on 12 and 13, Day had fallen to 4-over on the day, but then ran off three birdies in a row to get himself back into the picture.

A bogey on 17 did not help things, but 18 was nothing short of a disaster for the man who started 2017 ranked No. 1 in the world. Day sent his drive well right, but this story does not have the same ending as Jordan Spieth on #13 at Royal Birkdale.

Day compounded his trouble with another poor shot, was forced to take an unplayable, and further hacked his way down the closing hole, eventually carding a quadruple-bogey 8. The hole lead to a 6-over 77, and at even-par for the tournament, his championship hopes are likely over. 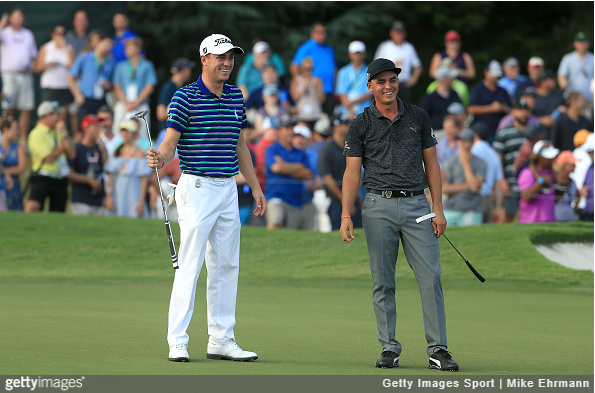 Rickie Fowler is under as much pressure as anyone to break through and win his first major championship. He was steady most of his round, and reached the green mile at -2 for his round and -5 for the championship.

Playing the final three at or near par would have had him in a great position going into Sunday. Then the green mile sunk his teeth into the star 28-year-old.

After a bogey on 16, Fowler sent his tee shot on the par 3 17th short of the green and into the water, leading to a double bogey. He added another bogey on 18, losing four strokes over the final three holes, and dropping him to -1 for the tournament, which has him in a tie for 12th and seven strokes behind Kisner’s lead.

After his round, Fowler tweeted “It’s on tomorrow”.

Nobody was more up and down in round 3, and this entire tournament for that matter, than the ultra-talented 22-year-old Spaniard Jon Rahm. 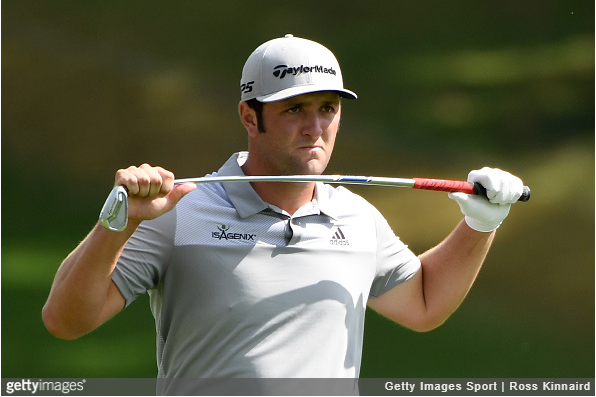 Rahm opened with a 1-under 70, but a second round 75 dropped him to 3-over. He exploded early on Saturday, with six birdies from holes 4-14 to suddenly vault into the top 10.

However, a short missed par putt on the par 5 15th suddenly sent him into a tailspin. Rahm then played the green mile double-bogey, par, double-bogey to finish at even-par and end any realistic championships he might have had.

Quail Hollow was so difficult on Saturday, that even the red-hot Hideki Matsuyama could not figure it out. 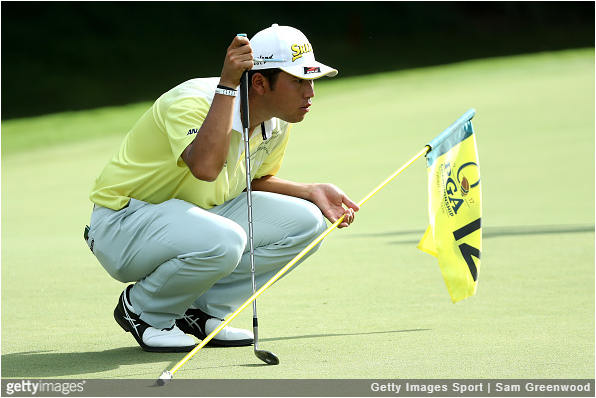 Matsuyama overpowered last week’s field at the WGC-Bridgestone Invitational, shooting a record final round 61 to win, and looked nearly as good at Quail Hollow in round 2 when he rocketed up the leaderboard with a 7-under 64.

Many thought he might run away from the field in round 3, but the course got the better of him.

The 25-year-old sensation from Japan had just one birdie on the day, and a back nine comprised one seven pars and two bogeys, which led to a 2-over 73.

Even still, he is just one stroke behind Kisner, and will play in the penultimate Sunday pairing with Justin Thomas, a man he seemingly traded wins back and forth with early in the year.

Round three was more about who struggled than who did great, but a few players did help themselves considerably on Saturday. 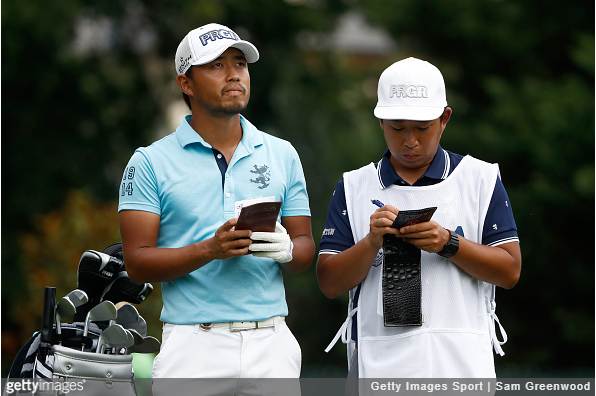 The low round of the day was shared by two players who were well back on the leaderboard, J.B. Holmes and Satoshi Kodaira.

The duo both moved up 52 spots on the leaderboard after matching rounds of four-under 67, and are now at +1 for the week, eight strokes behind Kisner.

Graham DeLaet had the stretch of the tournament late Saturday when he played 13-16 birdie, eagle, eagle, birdie which allowed him to finish with a three-under 68 and reach 2-under for the championship, five strokes out of the lead.

DeLaet’s eagle on the par-4 14th hole was very nearly a hole-in-one as his tee shot took the pin head-on and bounced out the inside of the cup.

Tour rookie Grayson Murray, a North Carolina native, bounced back from being 3-over through six holes and finished with a two-under 69. At 3-under for the tournament, Murray is still well in the championship.

Jordan Spieth admitted after his second round that his title chances are likely over. At 11 strokes back going into the weekend, Spieth needed an absolutely phenomenal round to give himself a prayer on Sunday of getting back into the tournament and keep alive his possibility of becoming the youngest career Grand Slam winner ever. 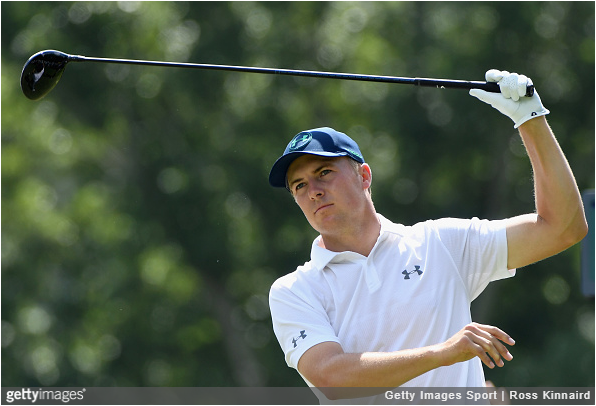 He did not get it.

Spieth did get hot for a while, playing 8-16 in 5-under, included three consecutive birdies on 14, 15, and 16. Unfortunately for him, his play outside that range torpedoed his minute hopes. Spieth had bogeys on three of his six holes and then sent his approach shot on 18 into a creek, leading to a double bogey and a round of even-par 71. He remains at 3-over for the tournament, and has seen his faint dreams fade away.

“The setup has been too tough for a PGA, to be honest.”
~ Webb Simpson, a Quail Hollow member, who is T59 through three rounds