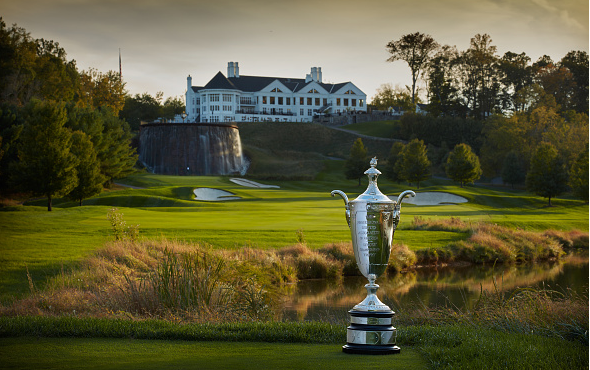 The second major of the PGA Tour Champions 2016-17 season is upon us, with the 78th KitchenAid Senior PGA Championship. For the first time it will visit the Washington, DC area and the Trump National Golf Club in Potomac Falls, VA.

The Senior PGA Championship is the oldest tournament on the senior circuit. The championship was born in 1937 on the grounds of another of golf’s majors, at the invitation of one of the game’s greatest players.

It was established in the fall of 1937 to provide an opportunity to PGA members ages 50 and over to compete with their peers. The purse was $2,000. To find better weather conditions, the event moved to Florida in 1940 and was played in various cities in the Sunshine State through 2000.

The championship was held at PGA National Golf Club in Palm Beach Gardens, FL, from 1982 to 2000. Beginning in 2001, the tournament moved to some of the great golf courses in the United States.

Designed by Tom Fazio in 1991 and redesigned again in 2014, the Championship Course boasts views of the nearby Potomac River on 13 of 18 holes.

Rain will increase once again this evening as a frontal system and low pressure area cross over the mid-Atlantic state. Rain will taper off temporarily Thursday morning, but scattered showers and storms will redevelop during the afternoon/early evening hours. A weak ridge of high pressure will provide improving conditions for Friday and much of Saturday before yet another storm system takes aim on the region.
(Forecast prepared by on-site meteorologist Willis Young.)

Rocco Mediate matched Kenny Perry’s Senior PGA Championship record for the lowest 18-hole score a year ago and tied the lowest score ever posted in a men’s major when he fired a 9-under-par 62.

Perry posted his score in the final round of the 2012 event at Harbor Shores. Mediate’s 72-hole total of 19-under-par 265 set a record, eclipsing Sam Snead’s previous mark (1973) by three strokes

Following his successful defense of the Regions Tradition last weekend at Greystone, and senior major win No. 8, Bernhard Langer enters Trump National as THE STORY.

Should Langer prevail at this week’s KitchenAid Senior PGA Championship, he would become the first player to have won all five major championships on PGA TOUR Champions.

Langer has posted five top-10 finishes in eight previous starts in this championship. His best showing came in his first start in 2008 at Oak Hill CC in Rochester, NY. He was the 54-hole leader by one stroke over Jay Haas and Jeff Sluman, but was undone by a 6-over-par 41 on the front nine.