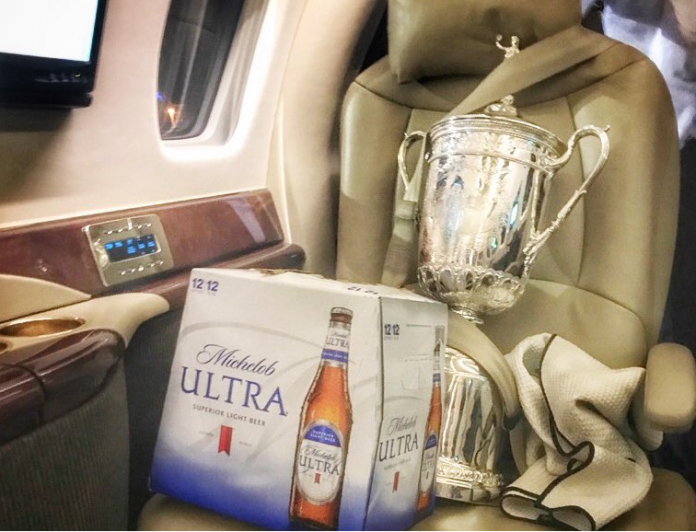 Fresh off his breakthrough major victory at the U.S. Open last weekend, Brooks Koepka has been a very popular guy, and like many in his position would, Koepka has even been taking the trophy out on the town.

The video was taken by Kristina Melnichenko, a friend of Paulina.

RT SInow "RT golf_com: Dustin Johnson and Brooks Koepka partying it up with the #USOpen trophy like: ?? ?? (?:: km… pic.twitter.com/mm5Q0orhNU"

And is there any beer better than Michelob Ultra to wash down a shot of Fireball? Of course not! Brooks plugs the Anheuser-Busch brand alongside the sterling silver jug – which is buckled in for a NetJets flight.

Leaving Wisconsin with some extra hardware! Thanks @NetJets! #OnlyNetJets pic.twitter.com/0WqC09B3ol

Fireball in the USOpen trophy! Brings back many memories.In my day, it was Budweiser from the tap. Have fun and be careful ?✌️ pic.twitter.com/1IccGSQi3r

“Fireball in the USOpen trophy! Brings back many memories. In my day, it was Budweiser from the tap. Have fun and be careful.”
–Curtis Strange via Instagram