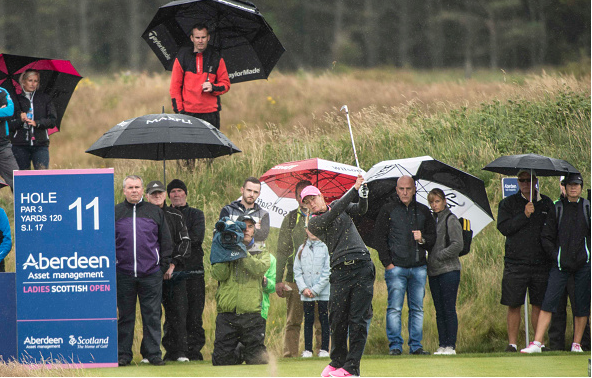 Co-sanctioned by the Ladies European Tour and LPGA, the Ladies Scottish Open will be contested at Dundonald Links, with the 156 player field vying for a tournament-record $1.5m purse.

Taking place the week before the Ricoh Women’s British Open at Kingsbarns, the Ladies Scottish Open will kick off a superb two weeks of links golf in Scotland, and conclude the LPGA’s 12 week summer marathon schedule.

The LPGA Tour announced the addition of four new tournaments to its 2017 schedule. The Thornberry Creek Classic, played earlier this month, and won by Katherine Kirk in dramatic fashion, was the first of these four new events.

The second new tournament is this week’s Aberdeen Asset Management Ladies Scottish Open – a tuneup before the Ricoh Women’s British Open, which caps off the LPGA’s aforementioned 12 week summer stretch.

At the start of the LPGA’s fall season, in September, the Tour stops in Indianapolis, Indiana at the Indy Women in Tech (IWIT) Championship Presented by Guggenheim, on the Pete Dye-designed Brickyard Crossing Golf Course that weaves through the famed Indianapolis Motor Speedway.

Originally known as Southern Gailes, the Kyle Philip’s-designed golf course was purchased by Loch Lomond Golf Club in early 2003, and the name was changed to Dundonald Links to reflect the area’s rich history. Dundonald means ‘Fort Donald’ and fortifications have been discovered nearby dated to between 500 and 200 BC.

Dundonald has played host to both the European Tour Qualifying School and the Senior Opening Qualifying. The prestigious Boys Amateur Championship came to Dundonald in 2014, before the course welcomed the LET’s Aberdeen Asset Management Ladies Scottish Open in 2015 and 2016.

Dundonald Links will play to a par 72, and stretch to 6,390 yards for the world’s best female golfers this week.

The 156-player field in Scotland includes five of the world’s top 10 ranked players, headlined by the world’s No. 1 and 2, So Yeon Ryu and Ariya Jutanugarn, respectively – who are both teeing it up for the first time since the U.S. Women’s Open.

All eyes will especially be on Jutanugarn, who has struggled badly since mid-June, with her last four starts resulting in a T-22, CUT, WD, CUT.

World No. 4 Lydia Ko, who finished 20th at last week’s Marathon Classic, will also be in the Scotland field, and still searching for win No. 1 of the 2017 season.

Shanshan Feng (No. 7) is also making her first start since the U.S. Women’s Open, where she nearly went wire-to-wire for the win, only to run out of gas at the finish line (T5). No. 8 Inbee Park rounds out the world’s top-10 in the field.

A handful of top Americans, who are currently on the south side of the Solheim Cup team bubble, will also be teeing it up, including Michelle Wie, Brittany Lang, Mo Martin and Angela Stanford.