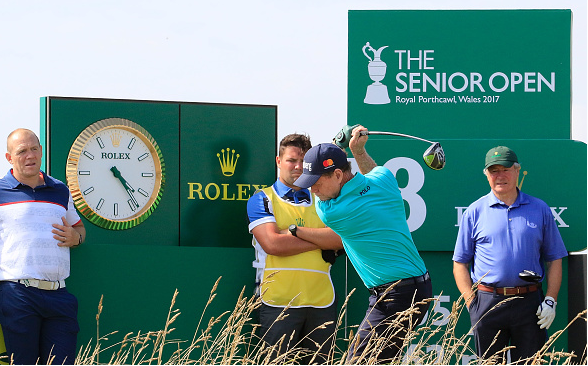 The fifth and final major of the 2017 Champions Tour season is upon us, with the 31st annual Senior Open Championship. For the second time in tournament history it will be contested at Royal Porthcawl, a par 71, measuring 7,010 yards, located in Wales, England.

The first Senior Open was held 30 years ago in 1987 but didn’t officially become part of the European Senior Tour until 1992. Some 11 years later, in 2003, it was sanctioned as the fifth major championship on the U.S. Champions Tour.

However, all champions prior to 2003 were not retroactively designated as major winners, a controversy that stands to this day. The event is traditionally held the week following The Open Championship, but has never been played on the same course.

At Turnberry, Englishman Neil Coles was the inaugural winner, edging New Zealander Bob Charles by one stroke. It would be the first of a record six runner-up finishes for the lefty Charles, who also won twice (1989, 1993).

Other winners of the Senior Open include three-time winners Gary Player and Tom Watson, along with two-time champ Bernhard Langer, and Fred Couples.

Only Player, Charles, and Watson have won both the Open and Senior Open championships.

Located in South Wales, bordering the Bristol Channel, Royal Porthcawl Golf Club was founded 1891, with its layout designed by Charles Gibson in 1892.

In 1909 it was anointed royal status by King Edward VII.

With terrain that slopes towards the seashore, and excludes sand mounds typically found on links courses, Royal Porthcawl offers views of Swansea Bay to the Gower Peninsula from each of its 18 holes.

The course has hosted many prestigious tournaments including the 1961 British Masters, the 1964 Curtis Cup, the 1995 Walker Cup, and most recently the 2014 Senior Open, where Langer won his second title.

In just his second start on the Champions Tour, Englishman Paul Broadhurst rebounded from an opening-round 75 with rounds of 66-68-68 to finish at 11-under and win The Senior Open Championship.

Broadhurst followed up that win with another victory at the Nature Valley First Tee Open (Now the PURE Insurance Championship) later in the season, joining Tom Watson and Ben Hogan as the only players with tour wins at both Carnoustie and Pebble Beach.

These two victories secured the 2016 Rookie of the Year for Broadhurst.

Broadhurst will return to defend his title, with hopes of winning for the first time this season. He will be joined by Langer, who is seeking his third Senior Open title, and third major of the season.

Ian Woosnam will be another headliner at Royal Porthcawl. The Welshman will tee it up at a golf course located just 135 miles north of his birthplace of Oswestry. Woosnam, who won 29 times on the European Tour as well as the 1991 Masters, will be inducted into the World Golf Hall of Fame during the week of the Presidents Cup in September.