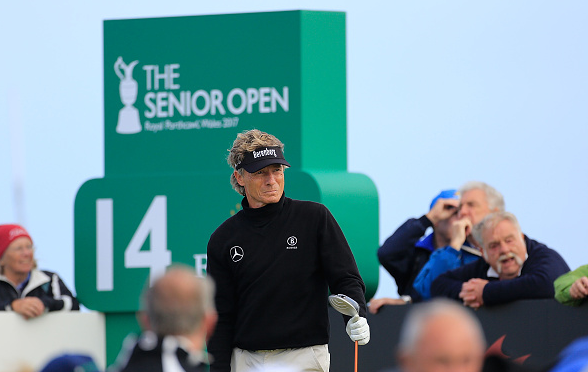 Bernhard Langer shot a 2-under 69 on Thursday at Royal Porthcawl and leads the Senior British Open after round one.

The nine-time senior major winner overcame the brutal conditions (wind, rain), along with an untimely bogey on the first hole, to finish with the best round among 144 players.

Langer made the turn at 3-under par following a four birdie/one bogey first-nine. A bogey on 11 and 17 dropped him to 1-under, but the 59-year-old German finished strong with a birdie on the final hole to take a one shot lead into Friday’s second round.

“I’m pretty pleased that I’m on top of the leaderboard at the moment,” Langer said, who won the 2014 Senior Open Championship at Royal Porthcawl by a record 13 strokes. “Conditions were extremely tough, and I’m not feeling very good physically. So I’m just glad that I made it through the day and I’m in contention.”

One back of Langer, tied for second at 1-under, is Argentina’s Mauricio Molina and England’s Carl Mason.

The 64-year-old Mason, who is the all time winner (25) on the Senior European Tour, was thrilled with his opening-round performance.

“I’m deliriously happy,” said Mason. “You go out there knowing it’s going to be a battling day, and you know you’ve just got to try and be patient and accept a few bad things are going to happen. I just played some really nice shots and putted quite nicely, there was only one disaster really.”

A logjam of nine golfers were at even-par, and tied for fourth, including Scotland’s Colin Montgomerie, England’s Nick Faldo, and American Tom Lehman.

“You have to be very, very patient in these conditions,” said Monty. “It’s the guy that can deal with adversity more than anybody that’s going to do well here. It’s extremely difficult and scoring is extremely hard.

Five-time British Open winner, Tom Watson, is at 1-over, and tied for 13th with fellow American Open champions, John Daly and Todd Hamilton.

“I do like the golf course; I think it’s very challenging. You can be aggressive at times and you’ve got to be cautious at other times. I think my game plan is pretty good; it’s just a matter of executing the shots and the putts.”
–Bernhard Langer, Leader, Round One, The Senior Open