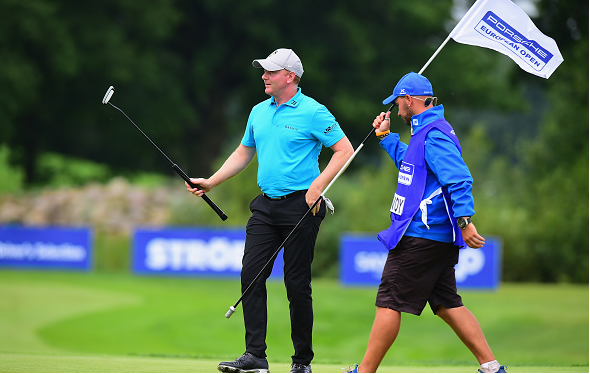 American Julian Suri and Englishman Richard McEvoy shot matching 6-under 66s on Thursday, and share the first-round lead of the Porsche European Open.

McEvoy was the early clubhouse leader following a bogey-free morning round of 66 at Green Eagles Golf Course. But the 26-year-old Suri, who plays primarily on the European Challenge Tour, took advantage of the four par-5s on the back-nine at the Hamburg (Germany) course, and closed with a five birdies to match McEvoy at 6-under.

“I feel like the longer holes play into my hands as I hit it fairly long and drive it pretty good,” said Suri, who played at his college golf at Duke. “I had plenty of looks all day and it just worked out my way on the last couple. I feel like I can score well on any hole out here, so I just have to hit the shots.”

At 5-under, one shot back, is group which includes defending champion Alex Levy, Stuart Manley, Chris Paisley, and Charl Schwartzel, the highest ranked player in the field at No. 21.

A logjam of nine players are tied for seventh place at 4-under, including American Patrick Reed.

Reigning PGA champion Jimmy Walker shot even-par 72 and is at T73, while fellow American Pat Perez struggled to a 4-over 76 (T129).

“So far it’s been a culmination of all the work I put in while I was home. This is my 11th event in 12 weeks, so it’s been a lot of golf and I feel I’ve been learning from each week.”
–Julian Suri, Co-leader, Round One, Porsche European Open

“It’s wet out there and I’m not the longest of hitters, I’m quite average on tour, but I did everything kind of right today. When I got myself in trouble I got out of it well and I took advantage of the holes where I was hitting wedges in, so a very pleasing start.”
–Richard McEvoy, Co-leader, Round One, Porsche European Open