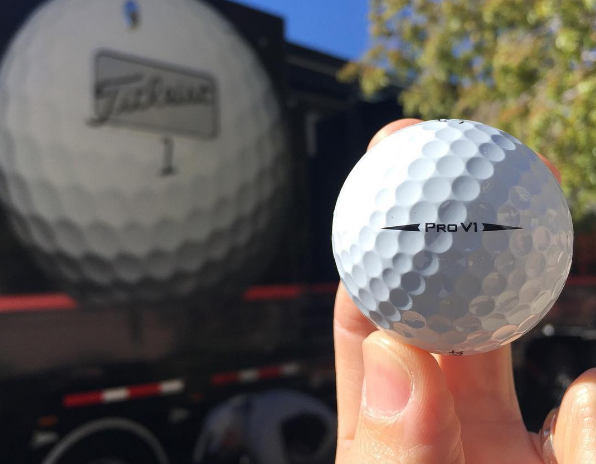 According to Titleist, its Pro V1 and Pro V1x balls are “the most played and best-selling golf ball models around the world.” And numbers don’t lie.

The maker of the #1 ball on the PGA Tour, is doing some social marketing by producing a photo archive of the Pro V1 through the years, and curating it on Twitter and Instagram.

As each year passes, Titleist tweaks the technology, and look of the ball ever so slightly, so it goes almost unnoticeable. But when comparing the original 2000 Pro V1 to the latest 2017 version, there’s a difference in the aesthetics relative to typography and styling.

Here’s a look at the Pro V1 in 2000, when it first debuted on Tour. Per Titleist, it “represented a revolutionary breakthrough in golf equipment history.”

It also was about as basic as you can get with no design whatsoever on the brand’s name – simply a basic sans serif font. The alignment graphics were not added until 2003.

Pro V1 & Pro V1x are the most played and best-selling golf ball models around the world. We’re exploring the archives of the #1ballingolf, and starting in 2000, when the 1st #ProV1 debuted on Tour. It represented a revolutionary breakthrough in golf equipment history.

In 2003, Titleist introduced the x version of its popular ball. It was designed with “a dual core and a high-coverage 332 dimple design.”

While the typography was still basic, this model added some graphics, with the introduction of alignment stamping.

Introduced in 2003: The new #ProV1x debuted with a dual core and a high-coverage 332 dimple design with 7 different sizes. #tbt

Here’s what the 2017 Pro V1 looks like. The prototype was rolled out in October at the Shriners Open in Vegas for Tour validation.

The font has been upgraded, implementing a techno font, and heavier alignment marking line.

That's a wrap from prototype Pro V1 and Pro V1x Tour seeding in Vegas. Good luck to all of #TeamTitleist at the @shrinersopen! #1ballingolf