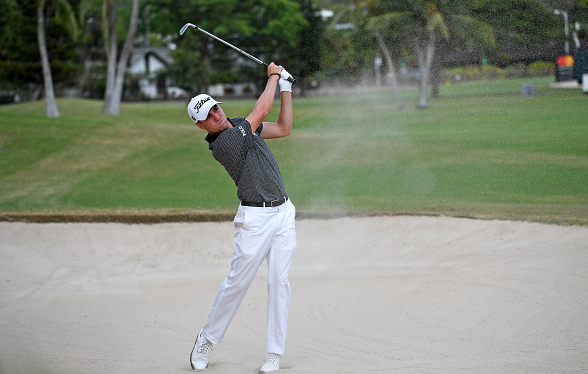 In winning the SBS Tournament of Champions in Maui last week by four strokes, Justin Thomas appeared to be in control for most of the final round, except for a brief moment on the middle of the back nine where a bogey allowed Hideki Matsuyama back into the tournament.

Nobody came anywhere close to stopping the hottest man in golf, as his 253 set the all-time PGA Tour scoring record.

It was the third win for Thomas in the very young 2016-17 season (nobody had more than three victories in the entire 2015-16 season), as he took both events of the Hawaii swing in addition to the CIMB Classic in Malaysia in late October.

A distant second to Thomas’s -27 finish was the -20 from Olympic Gold Medalist Justin Rose, followed by a -19 for Thomas’s close friend Jordan Spieth.

For the second straight round, Thomas got off to an underwhelming start, this time playing the first seven holes at 1-over (six pars and a bogey).

Fortunately for Thomas, for the fourth straight round he dominated the back nine, this time coming in at 4-under after birdies on 8 and 9 to post the 5-under 65 and secure the lowest four round total in PGA Tour history.

Surprisingly, Thomas hit just 3 of 14 fairways, although in his defense, fairways are very difficult to hit at Waialae. Even still, Thomas managed to hit 14 of 18 greens in regulation, a number he posted in all four rounds of his historically great tournament.

He led the field for the week in both birdies and eagles, something that often leads to runaway victories.

What It Means For Thomas

The 23-year-old Thomas is unquestionably amazing, if that had not already been clear. He now has three wins (all against good fields) in just five events this season, and has moved all the way up to #8 in the world, the first time he has been in the top 10.

He will be a favorite in every event he plays for the time being. Thomas has to be wishing the next major was coming before April, but if he brings his recent game to Augusta, he will be among the most feared competitors in the field.

For the second straight week, Jordan Spieth has finished in solo third, although like last week’s Tournament of Champions, Spieth never really threatened the lead, doing most of his damage after Thomas had already established himself on a different level than the rest of the field.

Even still, the pair of thirds is an encouraging start to the season for the 23-year-old superstar and two-time major winner.

While his 2016 was objectively great, he is hoping 2017 is more like 2015, when he was the runaway choice for PGA Tour Player of the Year. In the final round, Spieth birdied his first three holes, and then tore up the back nine on his way to a seven-under 63. Spieth tied for the tournament lead in greens in regulation for the week.

South Korea’s Y.E. Yang has never quite gotten back to the level he was at when he shocked the world to take down Tiger Woods from behind and win at the 2009 PGA Championship. He has not won on Tour since that breakthrough victory at Hazeltine, and has not been relevant in a major since a T3 at the 2011 U.S. Open where he still finished 10 strokes behind runaway winner Rory McIlroy.

Over the past few years, Yang has been off the PGA map altogether, barely playing due to injuries and struggling badly when he has teed it up – as he has not posted a top-10 since 2011.

If Yang is going to make a career comeback at age 44, however, this week was a huge step in the right direction. Yang played his best golf in years, shooting 67-65-71-66 for an impressive 11-under total. A tie for 27th may not leap off the page for most, but for Yang, it’s a tremendous result.

“It was really hard. I was really nervous this morning. I just had a hard time getting in a comfortable mindframe. I felt like I was doing what I needed to do; I was making some pars, besides that bad bogey on #4, but that par putt I made on #6 was huge, if I miss that, maybe I start worrying a little bit, but I knew I had a last 10-hole stretch I was very comfortable with, so just tried to stay patient.”
–Justin Thomas, Sony Open Champion