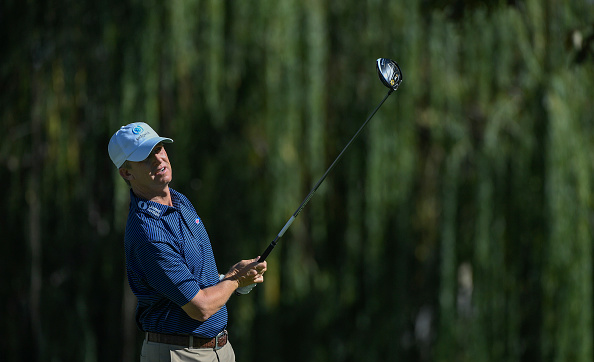 Jeff Maggert posted a 6-under 66 on Friday at Sherwood Country Club and shares the lead with David Toms after round one of the Powershares QQQ Championship. 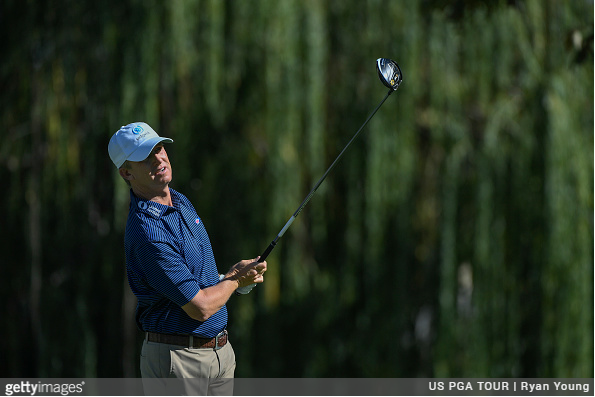 Maggert’s bogey-free scorecard included seven birdies, three of which came on the final five holes to secure a share of the top billing.

“I just tried to be patient today and take what the course would give me,” said Maggert, who is currently 47th in the Schwab Cup standings. “Obviously I need to play well here to move on to Phoenix, but I’m just trying to take it one day at a time and play well.”

The 66 by Toms was highlighted by a hole-in-one on the 186-yard third hole – the first ace in Charles Schwab Cup Playoff history.

“Yeah, it was a tough hole. It was a good yardage for me. I hit a cut 5-iron, I think I had 188, something like that,” said Toms, describing his ace. “Just hit a great shot, never left the flag. Hit about 12 feet short, rolled right in. Those are always a bonus when you get those.”

Jesper Parnevik got off to a slow start, and was 1-over through two holes after a bogey on the par-5 second. The Swede rebounded, though, with a birdie on No. 3, and then carded five straight birdies on Nos. 9-13 en route to a 5-under 67.

“I haven’t done that since I was a kid, I think. I think I haven’t done three in a row for a long time,” said an excited Parnevik. “I hit balls for about seven hours in pure desperation yesterday trying to find something that resembled a swing.”

Miguel Angel Jimenez birdied four of the five par-5s and is T4 at 4-under, alongside Scott Dunlap.

Bernhard Langer carded a 3-under 69 and is tied for sixth, along with John Daly, who played his last 10 holes in 5 under, overcoming a 4-bogey front nine. Billy Andrade and Joey Sindelar are also at 3 under.

A look at the projections of the all-important Top 5 spots after round one. Players finishing in positions 1-5 would control their own destiny with a win at the Charles Schwab Cup Championship.

“Oh, it’s always important, but my wife’s actually out this week, which she doesn’t travel very often. We’re just enjoying our time in California and at a great club here and trying to play my best and see where that is at the end of Sunday.”

The Starter: Irish Open’s First, The Greenbrier’s 18th, Plus Tiger, Toms, and Whatnot