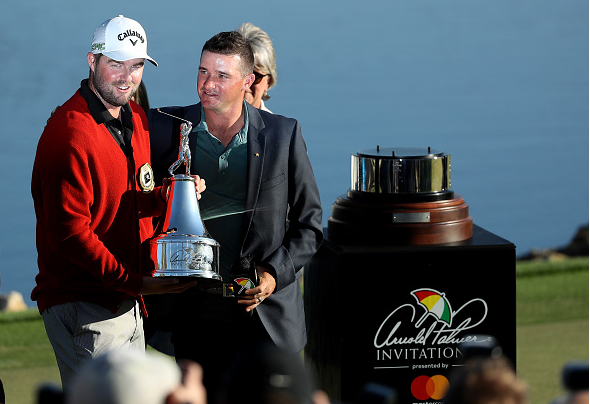 In three of his last four tournaments going into this week (Farmer’s Insurance Open, Waste Management Phoenix Open, and Honda Classic), Australian Marc Leishman played well enough in his first three rounds to at least give himself a chance on Sunday, but in each tournament, he shot a final round 73 and had to settle for a finish near the top-20.

It is ironic that today, Leishman was able to win the Arnold Palmer Invitational, largely because the two 54-hole co-leaders shot final round 73s.

That is not to say the tournament was handed to him; he took advantage of his chances, and a hot putter down the stretch engendered a final round three-under 69 that got him to -11 and gave him his first PGA Tour victory in five years.

It was an exciting finish to a tournament that had a sad aura over it all week, as the golf community attempted to celebrate the life and legacy of tournament namesake Arnold Palmer in the first year without him.

Going into the week, Leishman ranked second on Tour in strokes gained: putting, just a touch behind Gonzalo Fernandez-Costano. He is almost definitely #1 now after gaining near four strokes on the rest of the field today alone.

Kevin Kisner and Charley Hoffman had a three-stroke lead going into the final round, but neither was able to get much done with that lead. Rory McIlroy surged into the lead briefly, but stumbled down the stretch.

Leishman was quiet, but exploded to the top of the leaderboard when he drained a 51-foot eagle putt on 16. Tremendous par saves with the putter on 15, 17, and 18 prevented him from dropping back, the way the rest of the field was doing towards the end.

What It Means For Leishman

Winning a tournament that was classified as an invitational, Leishman now has a three-year Tour exemption. Leishman is a solid player, and it’s likely he would have qualified for most tournaments anyway, but the exemption gives him some security, especially with a young family, if he starts to find trouble in his game.

This was his second career victory, the first coming at the Traveler’s Championship five years ago. We have seen flashes from Leishman, particularly at the 2015 Open Championship where he made the three-man-playoff, and the 2013 Masters (T4), but actually getting back to the winner’s circle, especially in a come-from-behind effort could be tremendous for the 33-year-old’s confidence.

Rory just barely made the cut in this tournament, as he was +2 after 36 holes, but had the co-low round of the tournament in round three (65), and made himself relevant on Sunday when he kept his hot play going through the first 13 holes, getting to -4 for his round and -10 for the tournament.

The 27-year-old, and four-time major champion, was +1 over the last five, but for someone who has not played much golf recently, missing time with a rib injury, he should be happy with his result.

Adam Hadwin wasn’t special on Sunday, shooting a modest one-under 71, but a finish of solo-sixth is magnificent coming off his first career victory last week. He managed to stay within himself despite new distractions.

What Could Have Been

There are at least two players in the field should be extremely happy with what they did for 75% of this tournament. Argentine’s Emiliano Grillo was an 18-hole leader, and in second place after 36 holes, but a disastrous third round six-over 78 sunk his tournament.

A final round 68 snuck him back into the top-10, but he will be thinking a lot about the quadruple-bogey he had on Saturday’s front nine. Overall, the reigning Tour Rookie of the Year posted 67-68-78-68.

The other is England’s Tommy Fleetwood, a Euro Tour regular who recently took runner-up honors at the WGC-Mexico Championship. Fleetwood lost the tournament with a round one 78, but followed that up with rounds of 66-70-68 and finished T10.

Casual or avid golfers, who occasionally get frustrated with how difficult the game can be, would feel better looking at the scorecard of David Lingmerth today. At even-par through three rounds, Lingmerth wasn’t in contention, but a solid round would have led to a nice finish and an even nicer paycheck.

His day, however, was a nightmare, as he hacked his way to a 16-over 88, one of the worst rounds anyone has had on Tour in recent memory. The 29-year-old Swede’s round included five bogeys, three double-bogeys, one triple-bogey, and one-quadruple bogey.

“I’ve been playing well all year; I put the new Calloway driver in at the start of the year and it’s really been a game-changer. I’ve been driving it better than I ever have, and it’s funny, this game is a lot easier out of the fairways. That has probably been the biggest difference, and then the putter, the putter has been amazing this year; the stats probably show that, especially this week. All year I feel it has been really close, and I haven’t always played how I wanted to on Sundays, but today was the day.”
– Marc Leishman Arnold Palmer Invitational Presented By Mastercard Champion