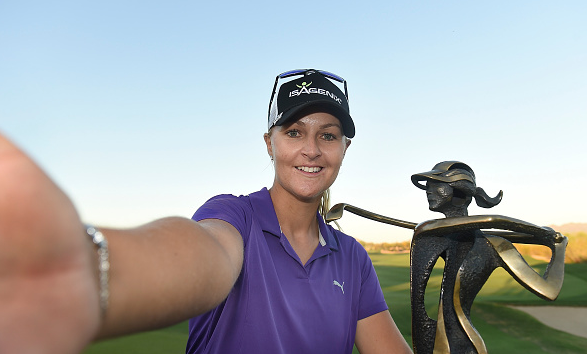 Sweden’s Anna Nordqvist fired a final-round 4-under 68 to capture the Bank of Hope Founders Cup at Wildfire Golf Club in Phoenix, Arizona.

Nordqvist was two-up entering Sunday’s final round, and never relinquished the lead, carding 5 birdies along the way. A meaningless bogey on the 18th, with the title already in the bag, was the only blemish on her scorecard.

For the four days – highlighted by a 61 on Friday, Nordqvist dropped 26 birdies and one eagle against just three bogeys – to finish the tournament at 25-under-par.

The trio of In Gee Chun, Stacy Lewis and Ariya Jutanugarn all finished tied for the second spot at 23-under-par.

It was the 29-year-old Nordqvist’s first win of the 2017 LPGA Tour season, and seventh win of her career. The Arizona State alum called the win “special” as it came at “home” in front of her adopted Phoenix, Arizona “family.”

“Yeah, I mean, of all the wins probably of the ones that’s going to be more special. Like if it wouldn’t be for me getting an opportunity to come to Arizona State University about ten years ago, I wouldn’t be here today,” said Nordqvist. “This truly still feels like home, even though I’m based in Florida. I have so many friends and family here. They feel like family, my U.S. family.”

Thank you everyone for the messages, love and support!! Truly means a lot!! Thanks to my girls who came out and drenched (!!) me on 18!! ?? pic.twitter.com/kYP42IoCy8

With the victory, Nordqvist earned a check for $225,000 and moved up 34 spots, into 3rd place, in the Race To CME Globe Season.