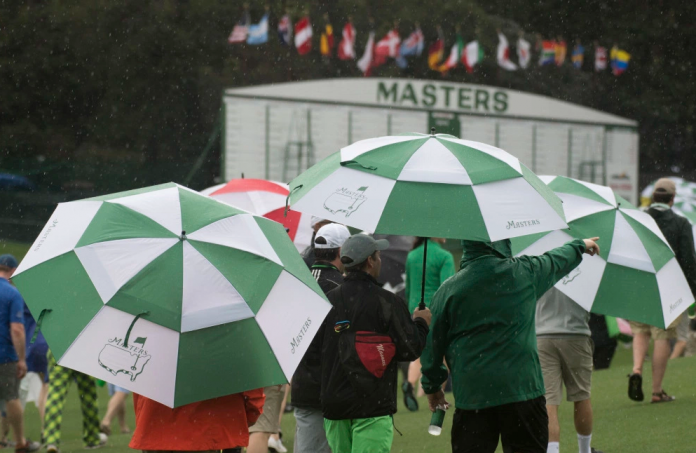 It’s Masters week, and for the first major of the year, we’re going to try something different here at Pro Golf Weekly. Each day we’ll be setting up a post that will act as a diary of sorts to capture and record the best Masters-related content of the day.

From headlines and links to photos and videos, we’ll update each day’s post with the best content as the day moves along. At the close of each day we’ll clean it up a bit with some formatting; create a stand-alone post or two using some of the content; and then publish it to our social channels.

With that, here’s our Masters Wednesday Capsule. (Most recent updates appear at the top.)

POSTED BY: Jeff at 2:15 PM
As predicted earlier (below) the remainder of the day at Augusta has been cancelled.

The course will be closed for the remainder of the day.

The Masters sent out an earlier tweet that warned patrons of the pending storms.

Gates will open as scheduled. Due to the threat of severe weather mid-morning, play may be suspended and the grounds evacuated.

Play was officially suspended around 10 AM ET.

Play has been suspended due to Inclement weather.

To kill some time, here’s a nice gallery of the par-3 course and its nine-holes.

The weather is not looking very good, despite re-opening gates. Tornadoes!?

Can anyone make sense out of this map?

A look at the weather headed toward Augusta from @wunderground. #themasters pic.twitter.com/NZEyPuKwvL

The players got in a practice round prior to the Par-3 Contest. Here’s a round up some of the best photos from Getty.

DJ hits a shot out of the bunker on the 10th hole.

Spieth hits a bunker shot too. This one from the 2nd hole.

Justin Thomas hits a shot on the 2nd hole.

Fans line up to watch Sergio Garcia tee off on the 18th hole.

Sergio and Rory McIlroy were one of the marquee groups to follow.

Sergio does a little landscaping…