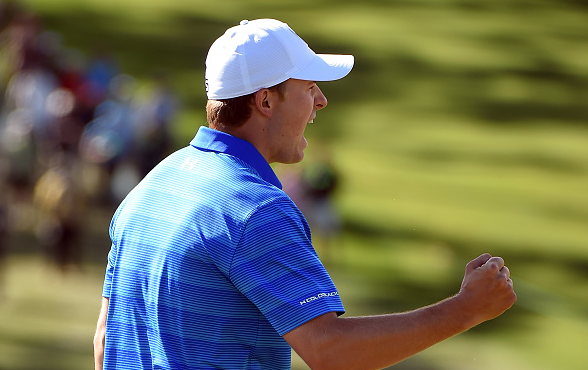 Jordan Spieth seems to have a penchant for Augusta, evidenced by his incredible first three career results there: T2, WIN, T2. He’s also held the lead at times in each, and has been in Sunday’s final group in all three.

No wonder why he calls it his favorite event.

“It’s my favorite tournament. I love being in contention here. I’ve had the luxury of having that every time I’ve been here and that’s not going to happen over the course of decades. And I recognize that. But don’t tell me that during the week because I’ll believe that it can happen every time,” said a confident Spieth at Tuesday’s press conference.

For a course that has a reputation for being nearly unplayable for inexperienced golfers (players with fewer than fours years of experience have rarely contended), it cannot be overstated how impressive he has been right off the bat.

In last year’s Masters, everything was set for another celebration of Spieth. At the turn, he held a five-stroke lead, and had been the leader after an unbelievable seven straight rounds. Having won the previous year, he looked ready to cruise to a convincing victory.

Fast-forward a few hours later, and Spieth is involved in the green jacket ceremony, but only because tradition dictates that the previous year’s winner places the green jacket onto the shoulders of the new winner.

Bogeys on 10 and 11 looked like minor blips on the radar: it’s Augusta, everyone drops a few. Spieth then sent his tee shot on the par-3 12th careening into the water. Then, after taking a drop, the unthinkable happened: he hit that shot into the water too. Spieth had to get up-and-down from a bunker just to escape Amen Corner’s second hole with a quadruple-bogey 7. A five stroke lead quickly turned into a three stroke deficit, one Spieth was unable to make up, despite his best efforts from 13-18.

Spieth has had to answer questions about that one-hole disaster for a year now. And the 2015 Masters champ is determined not to let it become a career-defining mistake, and blamed the media’s continued focus on the storyline due to the sport’s lack of drama.

“I just think there’s not enough that goes on in the golf world. There’s not enough drama, so it seems like people are searching for it. Unlike other sports, you don’t have negatives in golf very often. Therefore, there’s really not much news involved, as far as drama goes,” said an exasperated Spieth. “Unfortunately, it’s something that would pass quickly anywhere else, but it just lingers here, because there’s not much else.”

His caddie, Michael Greller, rightfully points out that with more talent comes the opportunity for more heartbreak.

He was surprisingly irrelevant for the rest of the 2016 major season, so there is no way to know for sure if residual Augusta trauma was a factor. But Spieth has played very well in 2017, winning the AT&T Pebble Beach Pro-Am and taking third in two other tournaments.

Despite a surprising cut at last week’s Shell Houston Open, he has looked very much like the 2015 version of Jordan Spieth, the one who captured two majors and was a runaway choice for player of the year.

The 23-year-old superstar said his game is in a good place, and now he’s just looking for a chance at redemption. On Sunday. On the back nine.

“We’ll step out and try and get a chance to win on Sunday on the back nine again. That’s all we’re asking for. That’s it. Just that small little piece,” said Spieth.