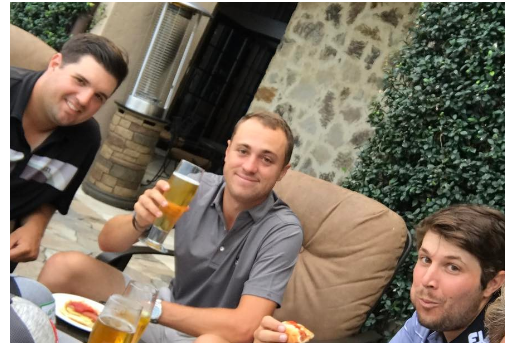 Justin Thomas opted out of last week’s Farmers Insurance Open, and instead hooked up with some buddies for a casual round at the Bear Club which included a former world #1.

Hole in one beers and hotdogs! Snagged my 16th hole in one today at the Bears Club with @peteruihlein @justinthomas34 @mikeballo #buckets #circleit ????

Despite the week off, the 23-year-old from Kentucky still holds a solid lead in the PGA Tour’s money race.

As we head into the week of the always-rowdy Waste Management Phoenix Open, Thomas ($3.8M) is up by about a $700k on Hideki Matsuyama ($3.16M), and nearly $2M clear of Pat Perez, who is having a superb start to the new season – currently in third place with $2.1M in earnings. All three are in the field this week.

The winner at TPC Scottsdale takes home a check for $1.2M, so the only player this week with a chance to leapfrog Thomas, with a win, would be the defending champion, Matsuyama.

While Thomas and Matsuyama are the only two players to have cleared the $3M mark, Perez is only the third player to jump into the $2M club, thanks to another top-5 finish last week at Torrey Pines – good for $252K.

The 40-year-old Perez is off to a superb start to the new season, and if not for the lights-out play of Thomas (and before him, Matsuyama), the former Arizona State star would be getting more media hype. To date, Perez has played in 6 Tour events, going: T33, T7, 1, T3, T69, T4.

The top two finishers at Torrey Pines joined the $1M club this week: Jon Rahm who grabbed $1.2M for his first win, and Charles Howell III who took home nearly $600K for a T2 finish. Howell was already having a solid year, with $700K coming into the Farmers, so this haul moves him into 7th place – and the only player in the top-10 without a win this season.