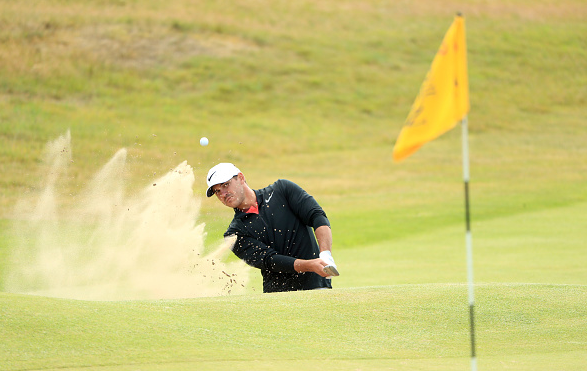 Jordan Spieth fired a bogey-free 5-under 65 in the opening-round of the British Open and headlines a trio of Americans atop the leaderboard at Royal Birkdale.

U.S. Open winner, Brooks Koepka, was also at 5-under, as was Matt Kuchar.

Kopeka, who played two groups behind Spieth, was at 4-under until he dropped a shot with a bogey on the par-4 16th. The 27-year-old recovered nicely, however, with one of the shots of the day: a chip-in eagle on the par-5 17th.

Kuchar’s card was also clean, with all five of his birdies coming on the front-nine.

One off the lead, and tied for fourth at 4-under, is Englishman Paul Casey, and former Masters champion Charl Schwartzel of South Africa.

A group of six players are tied for sixth at 3-under, led by England’s Ian Poulter, Spain’s Rafael Cabrera-Bello, who captured last week’s Scottish Open, and Justin Thomas.

Now onto the best shots of the day.

Andrew Beef Johnston chips in for a birdie on the par-4 sixth hole. ‘Beef’ finished his round at 1-under-par (T26).

Charley Hoffman got off to a fantastic start with a hole-out for eagle on the opening hole. Hoffman finished the day at 3-under, and is tied for sixth.

Brooks From The Bunker

Coming off a bogey on the 16th, Koepka dropped to -3, and two behind Spieth. But Koepka bounced back terrifically with a bunker hole-out for eagle on 17 to grab a share of the first round lead.

Great work! @bkoepka holes a bunker shot to move in to a share of the lead. #TheOpen pic.twitter.com/cv8UGVpRFD