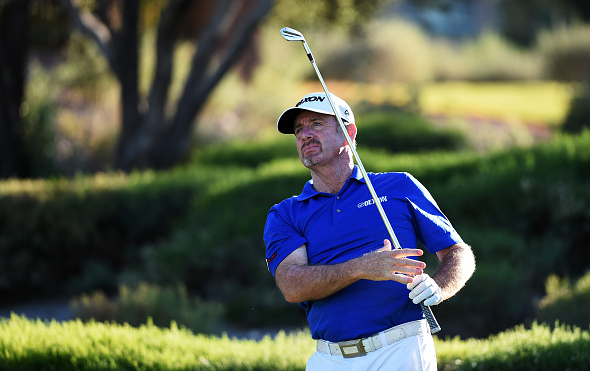 After a first round 60 in Las Vegas that nearly hit that magic 59, Rod Pampling was under pressure to maintain his position. His round two score wasn’t another 60, but after a 3-under 68, Pampling is still on top of the leaderboard.

His -14 after 36 holes puts him one stroke ahead of Brooks Koepka and two strokes over a surging Aaron Wise, who still has four holes left in his second round (play was called late due to darkness).

The 20-year-old Wise, who won last year’s individual NCAA Championship, is in contention for the first time at a PGA Event.

*- signals second round not finished

Notables To Miss the Cut

After birdies on 2 and 3, it looked like Pampling might still be in his elite round 1 mode. He then birdied 7 and it was starting to look like this could be a runaway.

However, he finally began looking mortal on hole 8, shooting his first bogey of the tournament. He was up and down from there with two more bogeys to two birdies to finish his day with a 3-under 68. Pampling was not quite as phenomenal tee-to-green as he was in round 1, but he still leads in strokes gained there.

Aaron Wise is not the leader, but at just strokes back with four left in his round, he might be on top when round 3 begins. Wise got off to a furious start, with three birdies and two eagles in his first seven holes. Both eagles were on par-5s where Wise drove the green in two.

It’s not often that someone shoots a Friday 61 and is still nine strokes back, but that is the reality of Chez Reavie, who was an insane 15 strokes better in round two than he was in round 1 (76).

After just one birdie in round 1, Reavie had 8 birdies and an eagle in round 2. Strangely, he actually hit one less fairway in his 61 than he did in his 76. His short game was in pristine form.

Joining Reavie at -5 for the tournament, the long-hitting Tony Finau birdied five of his first eight holes on his way to a six-under 65. Being five-under for the tournament is especially impressive when it is factored in that Finau was at +4 after 12 holes in round 1. Like Reavie, Finau also hit fewer fairways in his much better round.

After a first-round 62, John Huh was in a tie for second place, and on pace for his best result in years. Huh did not find his second round to be quite so easy however, as he was birdie-free over his first 15 holes.

Ben Martin won the Shriners just two years ago, but after a nightmare round two, he is in dead last among the 140 man field. Martin had four double-bogeys, finishing with a 10-over 81, the only round of 80+ in the field for the tournament.

Combined with his round 1 71, Martin sits at +10 and missed the cut by a mind-boggling 13 strokes.

“The hole looked really big yesterday. I don’t think I caught one early on, but I changed ball markers and I knew I was putting good so I kinda threw out a new vibe and it started to work. I knew it wasn’t bad, it just didn’t happen, so I let it go and corrected myself, and I played nice after that.”
–Rod Pampling, Round 2 leader