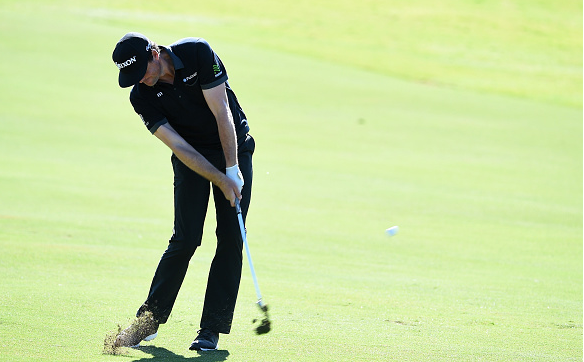 Coming off a course-tying record 60, Rod Pampling fired a 3-under 68, and continues to lead at the Shriners. Only one stroke behind Pampling is Brooks Koepka, who is at 13-under.

Here’s a roundup of quotes from the top 5 after the day number two at TPC Sumemrlin.

“The hole looked really big yesterday, and I started out today, and I didn’t think they’d cut them early on. I changed ball markers, and I knew I was playing good, so I just kind of threw out a new vibe, and it started to work. I knew it wasn’t bad, it’s just like it happened, so just let it go, and yeah, corrected myself and played nice after that.”

“Obviously the putter. I just feel like I’ve made a bunch of putts. I don’t know how many putts I made today, but I made quite a bit, and I just need to put the ball in the fairway. It seemed like we were a foot off on a couple holes, and out here you can’t be in the rough. Just tighten up the driver and see where we get.”

“I enjoy it. I’m not a big gambler, but I do definitely enjoy coming here. The weather is great, obviously, and I kind of like Phoenix a little bit, I enjoy coming to visit the desert and playing desert golf for sure.”

ome of the things you like to do when you’re here, away from the golf course?

“It’s great. Greens are rolling fast. Fairways are nice and firm. It’s definitely a premium to hit the fairways. The rougher, you’re getting some fliers, so it’s hard to adjust how far they’re going with the altitude. You know, it’s playable, a lot of low scores. I didn’t see 11-under out there yesterday, but apparently there is one.”

“Yeah, my game feels really good. I’ve been playing good for a while now. It’s nice to see some results. I’ve been working with my coach Darren May back home and putting a lot of work in, and some changes, and they’re finally coming together.”

“There was some rust a little bit. I had it going. I hit it good. Made some good putts, missed some easy ones, but it’s hard to do around this course. But just excited to get back. It’s really nice. I played good on the weekend in Malaysia, and I carried it over here. I got nervous over here because it’s a little different. You know you’ve got to shoot low, and I’ve played at home a lot, but it’s just awesome to be back and see some putts go in and hit some shots where I think they should go and hit it long. I’m really excited by it.”