Pat Perez fired a 7-under par 65 on Friday and leads the CIMB Classic by one shot after two rounds of play in Malaysia.

Perez, who started on the back, got off to a rough start at TPC Kuala Lumpur, and was 1 over after three holes and just 1 under at the turn. But the 41-year old Arizona native was sizzling on his final nine, dropping six birdies, highlighted by four straight on holes 2, 3, 4, and 5. 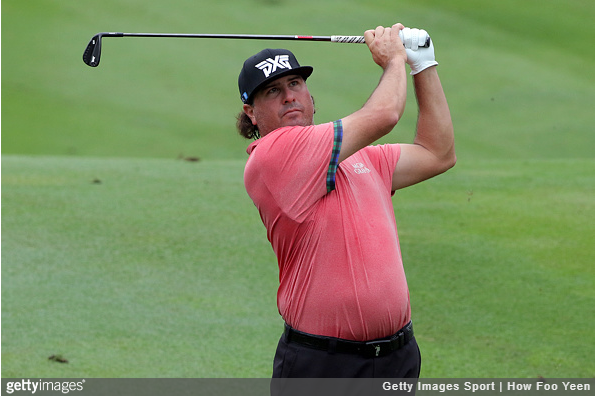 “I just got off to a slow start,” said Perez, who had his best PGA Tour season in 2017. “We had the [rain delay] break obviously and just went out, and I like the front, I play better on the front. Just made some decent shots and I putted pretty well today. My short game was good so that saved me.”

One off the lead is Rookie of the Year Xander Schauffele, who also posted a second-round 65, and sits at 12 under. The 23-year old Californian cited “comfort” for his recent performance.

“I’m just comfortable. I mean, everything’s kind of coming easy,” said Schauffele, who won twice during his 2017 rookie season. “Today was kind of one of those weird days where all the breaks, I had some squirrely tee shots and had a couple weird drops, but they all kind of went my way.”

First-round leader Cameron Smith shot 1-under 71 and is tied for third at 9 under, along with Thomas Pieters (67) and Sung-hoon Kang (68).

Keegan Bradley (71) is alone in sixth at 8 under, while Rafael Cabrera Bello (70) is right behind at 7 under.

Hideki Matsuyama shot a 4-under 68 and headlines a group of seven players tied at 6 under and T8.

Defending champion Justin Thomas has a lot of work to do on moving day if he wants a three-repeat. The 24-year old superstar posted a 1-under 71 and is 10 shots off the lead at 3 under (T33).

“Yeah, I didn’t really rush anything. I was just kind of taking it slow. I had a great time playing with Hideki [Matsuayama] and Branden [Grace], they’re great guys. We had some laughs and some fun and that makes it more comfortable for me. I hit some good shots. I wasn’t hitting that great so I didn’t really have a whole lot of pressure of hitting it close all the time and I just kind of relied on my short game, and I’ve been putting well all year so I just relied on that.”