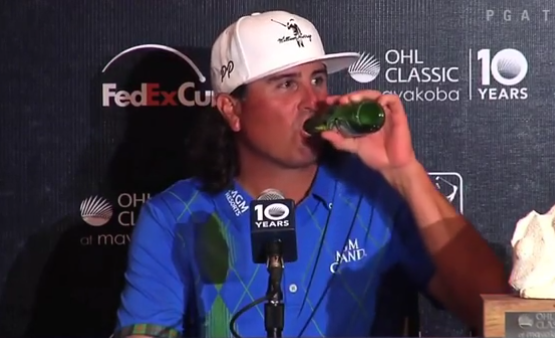 Pat Perez, who is off to a superb start to the 2016-17 season, had some harsh words regarding the future of Tiger Woods – even insinuating that his comeback is simply to milk as much money as he can for his new business.

Perez, who is one of the few players on Tour who doesn’t speak in cliches, didn’t hold back during his talk on PGA Tour Radio – which went viral.

Perez also made a statement that if Tiger “doesn’t play Augusta, then it’s over.” (Perez later clarified in a follow up interview that he meant “it’s over for the year.”)

Tiger dominated the game of golf for many years, racking up 79 PGA Tour wins, 40 European Tour wins and 14 Major Championships. He’s also spent 683 weeks as the number one ranked golfer in the world – quite possibly a record that will never be touched.

But as of late, Tiger continues to fade from the golfing world, and in my opinion, maybe it is time to step down. The guy really has nothing left to prove.

I disagree with Perez on one point. I think Tiger still believes he can win on the PGA Tour. But does anyone else? The competition level is at an all-time high, technology is at it’s best and players are working harder than ever before, which is making a Tiger comeback nearly impossible.

Secret Tour Pro (potentially Adam Scott?) may have put it best on Twitter:

I think this could be the start of him only playing the Majors from now on, and a VERY limited schedule! https://t.co/k04uXrOGnZ

Here is the audio of the conversation between Pat Perez and Michael Collins (@ESPNCaddie).

Here is the audio of Perez trying to clean up his comments, just a bit.