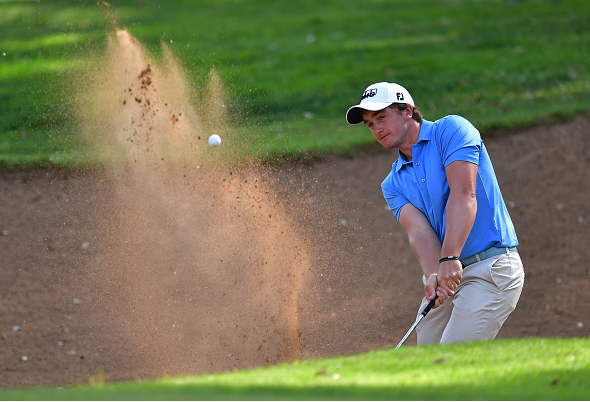 Ireland’s Paul Dunne fired a third round 69 and holds a two-stroke lead heading into the final day in Morocco at the Trophée Hassan II. The 24-year-old Dunne closed his Saturday round in style with a lengthy birdie putt on the 18th at Royal Golf Dar Es Salem.

Renato Paratore, of Italy, is two back in solo-second after posting a course-record 7-under 66. Paratore moved up 38 spots on the leaderboard after his record round.

The trio of Englishman Paul Waring, Spain’s Pablo Larrazábal and Lasse Jensen of Denmark are tied for third at 5-under.

Dunne started the day two shots behind 36-hole leader Grégory Havret but grabbed the lead about midway through his front-nine after birdies on 1, 4, and 5. Havret struggled to a 2-over 75 and dropped to T6 at 4-under, four shots off the lead.

One more roll for Bjerregaard and he’s at 5-under. Nice shot!

“I’ve been playing well recently and I haven’t played a tournament for four weeks with the break we had so I felt like it took me a while to get going with my swing this week. But today was a much easier round than the last couple of days. I didn’t putt as well as I did in the last couple of days but I hit the ball a lot better. I’m really pleased, I’ve been doing some good work and I’m happy with where I am. If I break 70 again I think it’s going to be hard for someone to catch me so I’m just going to try and do that.”
–Paul Dunne, Third Round Leader