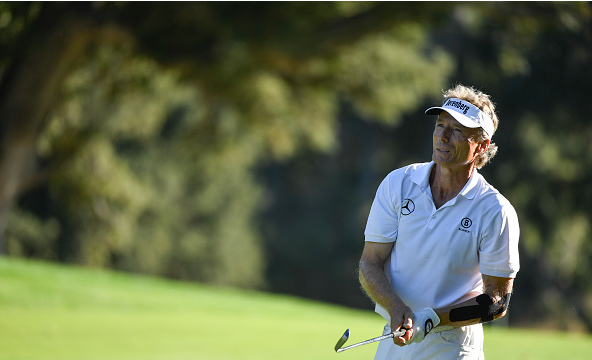 Bernhard Langer shot a 3-under par 69 on Saturday to grab a share of the lead heading into Sunday’s final round of the Powershares QQQ Championship. 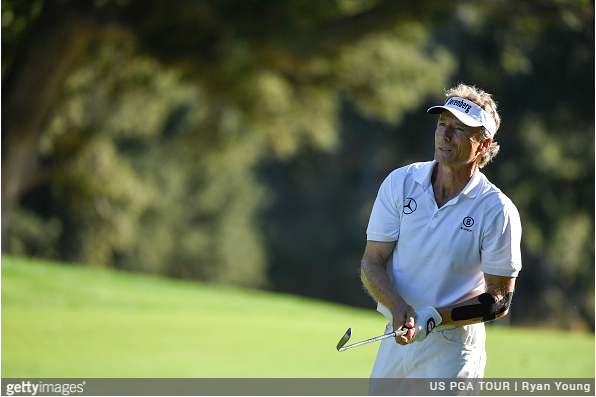 The 60-year old Langer, last week’s winner in Virginia, had an interesting start to his second day at Sherwood Country Club, posting a double-bogey on the par-3 2nd, followed by an eagle on the par-5 5th.

After that, though, the four-time Charles Schwab Cup champ settled down, and finished with four birdies against one bogey to get to 6 under.

“Played pretty solid coming in. The last few holes were pretty good,” said Langer. “Yeah, I still feel like I’m striking the ball well and made some good putts today, pretty solid there in that department. So it’s just not that easy out there.”

Miguel Jimenez and David Toms are also at 6 under, and tied at the top with Langer.

Toms, 50, posted an even-par 72, with three birdies and three bogeys, including a costly one on the 18th hole, which knocked him from the solo lead.

“Well, 18, I pushed my drive and I was in a tough spot. I hit a great recovery shot on the green, but I hit a long putt and misjudged the speed and left it about 10 feet short,” explained Toms. “Thought I hit a good second putt, but misread it. Hate to finish with a bogey, but at the same time, after the tee shot it wasn’t that bad of a score.”

Jiminez signed for a 2-under 70, with three birdies against one bogey, and will be paired with Langer in Sunday’s final pairing.

“I’m trying to do the best I can at this point. You hit it high, you hit it low. I’m trying to play, enjoy the game, that’s the main thing,” said Jiminez.

After 13 holes, Scott McCarron rode six birdies to the top of the leaderboard. But a closing five holes of 2-over par, with a pair of bogeys, dropped the four-time 2017 winner into the fourth spot, tied with Billy Andrade (70) and Jeff Maggert (73).

“I made some mistakes, but a lot of good things. So I’ve got to focus on the good stuff and try to clean up the rest of the stuff a little bit,” said McCarron.

Kenny Perry fired a 5-under 67 – the day’s low round, and leads a group of four players tied at 4 under.

“It wasn’t easy out there. Some of the greens are very firm, the ball doesn’t stop very easily. Hit one really bad shot there on 3 that went in the water, made double. Otherwise, didn’t play all that bad. Missed a couple of greens with a 9-iron and a sand wedge there, which was not what I had hoped for, but hit a lot of good shots, too. Had a great eagle on 5.”