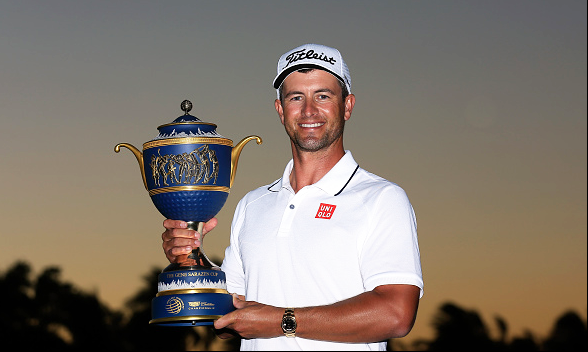 When pondering international golf paradises, Mexico does not come to the forefront of the mind for most. At least not before Scotland, Ireland, England, Brazil, Argentina, South Africa, etc. Historically, there is just one Mexican golfer that the average sports fan is conversant with: former superstar Lorena Ochoa, a 27-time LPGA Tour winner who is set to be inducted into the World Golf Hall of Fame in September.

On the men’s side, the most historically recognizable Mexican names are guys like Carlos Ortiz and Esteban Toledo, excellent golfers in their own right, but generally not well known to anyone besides the most dedicated fans of the sport.

Fortunately, the PGA Tour, with help from Grupo Salinas, a big name in corporate Mexico, is looking to change that. The two succeeded in bringing a World Golf Championships (WGC) event to Mexico: The WGC-Mexico Championship.

Set to debut this week in Mexico City, the inaugural tournament boasts some of the biggest names in golf, such as Phil Mickelson, Rory McIlroy, Jordan Spieth, Henrik Stenson, Justin Rose, Sergio Garcia, Hideki Matsuyama, and new world #1 Dustin Johnson. It is a worthy challenge that could very well catalyze Mexico’s transformation into a world golf superpower.

The World Golf Championships-Mexico Championship began in 1999, with the other WGC events. Known as the WGC-American Express Championship in its inaugural year. Two of the only three players in the field to finish under par, the 1999 event ended on the first hole of sudden death as 23-year-old Tiger Woods, who squandered a four-stroke lead with two holes to go, got the best of 35-year-old Spaniard Miguel Angel Jimenez. It was Tiger’s first win of seven in the event, the most of anyone by far (Ernie Els is next with two).

The tournament bounced around several countries until it found what was supposed to be a permanent home in the U.S. at famed Trump National Doral in Miami, Florida. Trump Doral resort owner Donald Trump, a wildly famous businessman, who recently took a government job, had been the tournament host since 2013.

When Cadillac’s sponsorship of the event ended in 2016, the event moved to its new location at Club de Golf Chapultepec in Mexico City, a move the PGA says was more about sponsorships, and less about politics.

The defending champion of the WGC-Mexico Championship is Adam Scott. At Trump Doral in Miami, Scott went into the final round three strokes behind four-time major winner Rory McIlroy, and dug himself a deep hole on Sunday with two early double-bogeys (holes 4 and 5).

Scott responded with a birdie binge, and with seven birdies total, he shot a final round three-under 69 and got to -12 for the tournament. Meanwhile, McIlroy collapsed on Sunday, shooting a 3-over 74 and dropping into a tie for third, which lead to Scott’s one-stroke victory over Bubba Watson. It was Scott’s second victory in two weeks.

Lowest Final Score: The lowest final score at the tournament that is now WGC-Mexico was the 261 shot by Tiger Woods in his 2006 victory.
Low Round: 62 (Sergio Garcia, Retief Goosen, Bubba Watson, J.B. Holmes)

1. Dustin Johnson’s View From the Top

As a 13-time Tour winner, Dustin Johnson is no stranger to PGA Tour success, but after his runaway victory at the Genesis Open less than two weeks ago, Johnson is in a place he has never been: #1 in the world.

Taking over Jason Day’s spot atop the Official World Golf Rankings, the WGC-Mexico will mark DJ’s first tournament as world #1. In a tournament with a location that is new to everyone in the powerfully strong field, the long-hitter is believed to have a significant advantage in the thin air of Mexico City, where his length advantage will be even further punctuated.

Things could not be going much better for DJ as of late. His victory at the Genesis was a five-shot blowout where he lapped the field in nearly every meaningful statistic. His first win of 2017, the victory comes fresh off a season where he won three tournaments, including his first career major (the U.S. Open), and was named 2016 PGA Tour Player of the Year.

Johnson was the 2015 winner of this event, coming back from a 54-hole deficit of five strokes to overtake J.B. Holmes in the final round. It was the second of his three WGC victories, a number that ties him with Geoff Ogilvy for second-most in WGC history, and just a mere 15 wins behind Tiger Woods (18 WGC wins) for first.

DJ’s chances look great, as they almost always do, but former #1s would say that there is a whole new pressure for him to deal with now.

McIlroy had been scheduled for a few 2017 events prior to this one, but a rib injury in early January put him on the mend. The 27-year-old world #3 is believed to be ready to go in Mexico City, but in a field this good, he will not have much time to shake off the rust, and rib injuries (Rory’s is a fractured rib) are notoriously slow to heal.

Rory is coming off a season where he won twice on the PGA Tour, both FedEx Cup playoff events. His playoff victory in the Tour Championship over Kevin Chappell and Ryan Moore won him the $10 million FedEx Cup.

As great as his September was, by his lofty standards, the 2016 major season was disappointing. While he did finish in the top 10 at both the Masters and the Open Championship, Rory did not really contend at either, and he shockingly missed the cut at the U.S. Open and the PGA Championship.

Being just a green jacket short of the Career Grand Slam, McIlroy is unlikely to be down on the big stage for long. Rory has two career WGC victories, taking the 2014 Bridgestone Invitational and the 2015 Dell Match Play.

Last year at Doral, Rory held a three-stroke lead going into the final round, but uncharacteristically struggled over his final 18 holes, shooting a two-over 74 to finish T3, two strokes behind winner Adam Scott. Rory has been famously resilient in his career, however, and if he’s 100% it is difficult to imagine him not being in the mix again on Sunday.

Most PGA Tour fans are familiar with the young stars on Tour: Jordan Spieth, Jason Day, Rory McIlroy, Rickie Fowler, Justin Thomas, etc, but not too many in the states know about budding 21-year-old European Tour superstar Jeunghun Wang.

Wang, from South Korea, will be making just his second career PGA Tour appearance this week, previously missing the cut in his American debut at last year’s PGA Championship.

Wang has been incredible in his short time on the European Tour. He won twice in 2016, going back-to-back in mid-May, and with his January victory at the 2017 Qatar Masters, Wang became the third-youngest player in European Tour history to reach three career victories. Only Matteo Manassero and Seve Ballesteros reached that milestone quicker.

South Korea is an absolute powerhouse in women’s golf, but is still looking to make more splashes on the men’s side. Y.E. Yang’s triumph at the 2009 PGA Championship was huge for the golf-crazy Pacific nation, and K.J. Choi has had a successful U.S. career, winning eight events from 2002-2011, but that has been about it for them – although K.T. Kim and Sangmoon Bae have shown some promise.

Wang may represent the nation’s best chance to get to the forefront of the men’s golfing world. He is certainly off to a great start.

Stenson had been playing well on both the PGA and European Tours for years, even winning the 2013 FedEx Cup, but he really rose to prominence with his unbelievable, record-breaking win at the 2016 Open Championship.

In the past year, the 40-year-old Swede also won silver at the Olympics in Rio, defeated Jordan Spieth in Sunday singles at the Ryder Cup, contended at the PGA Championship, and won the European Tour’s Race to Dubai. This will be Stenson’s 2017 debut in the Americas. He has one career WGC victory, taking the 2007 Match Play Championship.

Willett tied with Rory McIlroy for third at last year’s version of this event in Miami. He was later able to parlay that great finish with a breakthrough victory at the 2016 Masters.

Since then, however, he has been mostly MIA on the PGA Tour, not finishing any tournament better than T37. He played last week in the Honda Classic in Florida, but missed the cut after two so-so rounds, although his round one 69 was his first sub-70 round in the U.S. since his final round 67 at the Masters in April.

Scott, the defending champion of this event, became the most prominent Australian in the field when recently dethroned world #1 Jason Day withdrew with an illness. Scott’s 2016 win was unfathomable, as he started the final round three strokes out of the lead, double-bogeyed two early holes, and still found a way to finish in the winner’s circle.

The owner of perhaps the prettiest swing in the game, the 36-year-old is looking for career win #14 and his third WGC title.

Spieth has looked invigorated since the calendar flipped to 2017. In five starts, he has four top-10s, including two third-place finishes, and a four-stroke win at Pebble Beach.

Spieth, the 24-year-old two-time major winner shines in big events and against top competition, and his formidable all-around game makes him a threat anywhere. He has not had much success in this event in the past (he has a T34 and two T17s in three appearances), but at a new location, past results can be thrown out.

As the lone Mexican native in the field, the most fanfare and the biggest cheers will likely be for Diaz, who was given an exemption for being the highest ranked Mexican in the OWGR (#473).

The 30-year-old from Veracruz has been playing mostly on the Web.com Tour the past three seasons. He has played in three career PGA events, all at the OHL Classic at Mayakoba, a fall series event held in Mexico. Diaz missed the cut in all three.