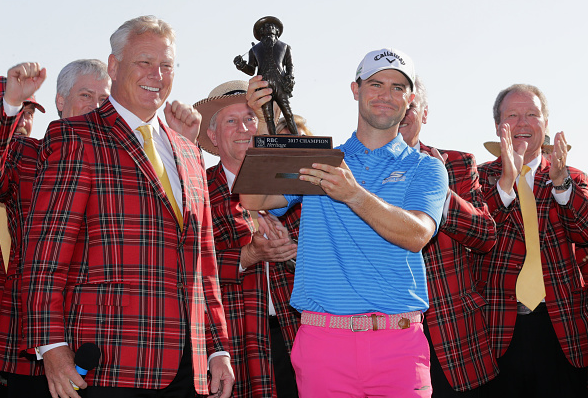 Wesley Bryan fired a final-round 4-under-par 67 and rallied to win the RBC Heritage by one-stroke over perpetual RBC bridesmaid Luke Donald. The South Carolina native started the day tied for 6th with five players between him and the top of leaderboard, including 54-hole leader Jason Dufner.

But after rattling off four consecutive birdies on holes 4 through 7, coupled with poor play from each of the other contenders, Bryan became a legitimate threat to win his home state tournament.

As it became clear he was closing in on his maiden Tour win, the former trick-shot artist was cheered on by the hometown fans, finally grabbing the lead after a birdie on the par-5 15th. From that point, Bryan cruised to even-par over the final three holes to capture his first career PGA Tour title.

Donald, the former world No. 1, shot a 3-under 68 to once again finish runner-up at Harbour Town. It’s the fifth second-place finish for Donald.

Ollie Schniederjans, Patrick Cantlay and William McGirt tied for third at 11-under, two strokes behind Bryan.

In addition to the plaid jacket and trophy, Bryan also earned $1.17 million, 500 FedEx Cup points, and a two-year tour exemption.