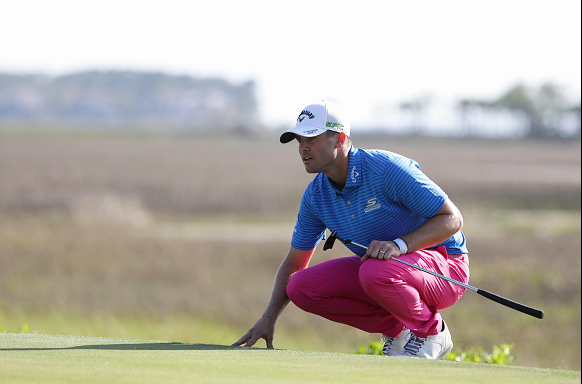 It wasn’t expected to take long, and it didn’t. In an unpredictable, upside down kind of Easter Sunday where the man who led the tournament to begin the day finished tied with the man who started the day in 63rd place.

Wesley Bryan emerged from a crowded leaderboard with a four-under 67 to win the RBC Heritage by a single stroke over ultimate bridesmaid Luke Donald.

An internet trick-shot celebrity, Bryan was already well-known in the golf world when he won his third Web.com Tour event in late 2016 to earn a full-time PGA Tour card. He validated his card immediately by contending at the John Deere Classic the following week.

Now in just the 14th start of his rookie season, Bryan, playing in his home state of South Carolina, added an important milestone to his golf resume: PGA Tour winner.

How Wesley Bryan Did It

While it did not hurt that all five players who began the day ahead of Bryan finished multiple strokes over par, Bryan put together a phenomenal final round.

Starting the day four strokes out of the lead, Bryan shook off an early bogey on 3, and birdied four consecutive holes (4-7) to explode into contention.

Then, on the back nine, when everyone else on the leaderboard was tripping over themselves and sending professional golf back decades, Bryan didn’t let the others distract him, playing the final nine holes in bogey-free 2-under, good for the final round 67.

At -13 for the tournament, he finished one ahead of Luke Donald, who now has seven(!) top 3 finishes in his last nine attempts at Harbour Town without a victory.

What It Means For Bryan

Those who have been paying attention knew that Bryan was much more than a trick-shot artist, and now as a PGA Tour winner, everyone else knows too. Bryan’s 2017 started with three consecutive missed cuts, but after a T42 in Phoenix, he finished in the top 7 of three consecutive events (T4, T4, T7), and made it look like it was just a matter of time.

Bryan is now the third 2016 Web.com Tour graduate to win this season (MacKenzie Hughes, Cody Gribble), and as dominant as he was on the minor league tour, he will be happy to not have to play any events there for at least the next two years.

It is also yet another victory that the state of South Carolina can claim, as Bryan is a South Carolina native, who played for USC. In 2017, Clemson won the NCAA football title, while the University of South Carolina’s mens and womens basketball teams made their respective final fours.

A Brutal Day For Leaders In Hilton Head

While many good rounds were posted on Sunday, very few came from those who began the day on the first page of the leaderboard.

The 54-hole leader, Jason Dufner, was a disaster, shooting a final-round five-over 76. The terrible finish came one day after Dufner carded something better than par on seven holes (5 birdies, 2 eagles). On Sunday, Dufner had just one birdie, with pars or worse on the other 17, to finish outside the top 10.

Graham DeLaet, playing in the final group with Dufner, wasn’t much better in his attempt at a first PGA Tour win. Somehow DeLaet birdied four holes on the front nine, and STILL made the turn over par. A two-over 73 dropped him to a tie for sixth.

Webb Simpson, who like Dufner, is a former major winner and is attempting to regain Tour relevancy, birdied his first two holes, but then played the final 16 holes in 5-over for a three-over 74. He finished tied for 11th place with Dufner.

Also in that T11 group was Kevin Kisner, who grabbed the lead early but collapsed down the back nine, also posting a three-over 74.

Ian Poulter, a former PGA Tour great, has status on Tour based on a major medical exemption after he missed considerable time in 2016 with a foot injury. Going into the week, he had just two starts left on that exemption to make $145,000 and maintain his card.

Starting the day in fifth place, Poulter looked like a near lock to get that all this week. However, Poulter became another Sunday Harbour Town victim, and after a two-over 73, he finished T11.

Now, the Englishman needs $31,000 in his next start to keep his card. It’s definitely doable, but his recent form has not been great, and that combined with extra pressure will make it a difficult task.

Moving Up in Round 4

Among the large group that finished T11, several of them (Dufner, Simpson, Kisner, Poulter) were Sunday disappointments. One player whose T11 was fantastic, however, was Matt Kuchar.

Starting the day in a tie for 63rd place, the man who also went low on Sunday at The Masters, shot the round of the day: a seven-under 64 that was three strokes better than the next lowest score. Kuchar did most of his damage on the front nine, with an eagle and three birdies allowing him to make the turn at -5.

Patrick Cantlay continued his impressive career bounce-back, shooting a four-under 67 to finish T3. This is Cantlay’s second 2017 high finish, as he was runner-up at the Valspar Championship in March.

Brian Gay once won the RBC Heritage by an unfathomable 10 strokes, but has seen very few leaderboards since, as he has just two top tens since January 2013. After finishing Sunday birdie, birdie, birdie, birdie for a four-under 67, Gay finished T6, and showed that he may still have it.

“It definitely hasn’t sunk in yet. I mean, of all places, it’s right back here where it first goes down. I’m going to remember this one for a long time.”
–Wesley Bryan, RBC Heritage Champion.