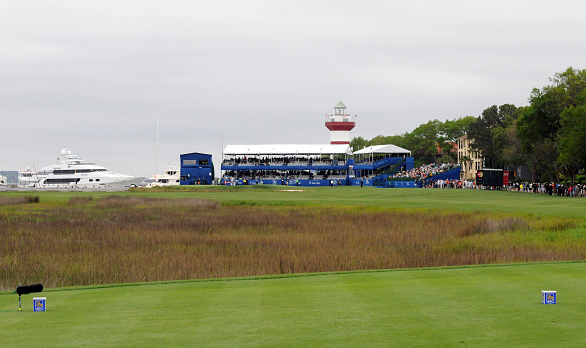 The world we now wake up to is much different than the world we woke up to last week. Up is down, black is white, cold is hot, and Sergio Garcia is a major champion.

With his thrilling Masters playoff triumph over Justin Rose, Sergio becomes the latest former mainstay of the “Loveable Losers” franchise to ascend into the realm of champions, joining recent drought-snappers such as the Chicago Cubs, the Western Bulldogs (AFL), and the city of Cleveland, Ohio.

It becomes another shining example of the unpredictability and parity of the PGA Tour, something many leagues strive for, but few actually achieve.

The first chapter of the post-Masters season is set to tee off this week on Hilton Head Island, the treasure of South Carolina’s southeastern coast. A reinvigorated field comprised of 132 of the world’s best golfers will take their best shot at the RBC Heritage, a rare tournament with invitational status. It provides a worthy challenge to those who were beaten down by Augusta last week, along with those who wish to be invited to a future edition.

As one of the shortest courses on Tour, Harbour Town Golf Links, this week’s tournament host, has a well-earned reputation as a shot-makers labyrinth. This week’s winner is unlikely to be someone who just hits it long and hopes for the best. He will need to be precise and bring a high-end iron game.

Most years since 1983, the RBC Heritage has been the first event of the post-Masters season. As a result, a number of the higher-ranked players pass on this tournament, needing a break from arduous Masters prep, but it still typically draws a good field, particularly with its status as an invitational (smaller field, better money, better exemptions, etc).

Harbour Town Golf Links, an incredible Pete Dye design, with help from Jack Nicklaus, has been hosting the tournament since its inception in 1969.

The inaugural event was somewhat overshadowed by the Vietnam War draft lottery, which took place the day after the tournament ended, but it was thrilling four days, with one of the all-time greats, Arnold Palmer, winning by three strokes.

Other winners of the RBC Heritage include Jack Nicklaus, Hale Irwin, Johnny Miller, Tom Watson, Nick Faldo, Bernhard Langer, Payne Stewart, and Greg Norman. Davis Love III leads the tournament in wins with five, most recently in 2003. The only other player with more than two is Hale Irwin, whose three victories include the first (1971) and last (1994) wins of his illustrious career.

The defending champion of the RBC Heritage is Branden Grace. The South African star began the final round three strokes behind 54-hole leader Luke Donald, but quickly got into the leader mix with four birdies on his first six holes.

Grace cooled off a bit on the back nine, but was able to stay ahead of eventual runner-ups Donald and Russell Knox, shooting a five-under 66 to finish at -9 and win the tournament by two strokes. Grace’s first career PGA Tour victory came in spite of a second-round 74.

Branden Grace, a 28-year-old South Africa product hit the international radar in 2012 when he came up victorious in four European Tour events. Since 2013, he has played roughly 12 tournaments a year on the PGA Tour, struggling at first, but really burst onto the American scene in 2015, when he contended at both the U.S. Open (T4), where he co-lead as late as the 16th hole on Sunday, and the PGA Championship (solo-3rd).

Grace would go on to finish in the top five of those same two events in 2016, his first year as a full-time PGA Tour member. Last season was also the year of his first PGA victory, the two-shot triumph at the RBC Heritage.

More recently, he has withdrawn for the Honda Classic after an opening-round 77, missed the cut at the Arnold Palmer Invitational after matching rounds of 75, and played poorly at the WGC-Dell Match Play, going 1-2-0 in group play.

The Masters was a mixed bag for Grace. Like most of the field, he got off to a terrible start in the high winds, going 76-74 in the first two rounds, making the cut on the number.

Grace was much better on the weekend, though shooting a combined -3 between Saturday and Sunday. Finishing at +3 was good for a tie for 27th place. It was not a special result, but could be considered encouraging, as he had missed the cut in his three previous Augusta attempts.

More concerning, at least in regards to this week, Grace ranks a dismal 160th on Tour in driving accuracy, something that is especially important at Harbour Town. He also ranks a painfully average 87th in greens in regulation percentage, and an atrocious 188th in shots gained: around-the-green.

Numbers like that are not conducive to a successful Hilton Head defense. Just one year after ranking an impressive 15th on Tour in shots gained: tee-to-green, he has plummeted to 141st this season. Perhaps playing somewhere he has won before will allow him to emerge from this recent funk.

Luke Donald’s game appears to be a good fit for Harbour Town, as he has had the following finishes over the past eight years:

That makes six(!) finishes of second or third place in his last eight attempts. That is nearing Phil Mickelson in the U.S. Open territory. As a shorter-hitter,who prioritizes accuracy, Donald knows how to get around Harbour Town efficiently, but just hasn’t been able to close the deal.

Last year, Donald contended until the end, but could not buy a birdie down the stretch, as his back nine started with a bogey and ended with eight consecutive pars. As usual, however, he is considered among the favorites this week.

Donald has fallen pretty far since 2011, when he was ranked #1 and finished atop both the PGA Tour and European Tour money lists. He still makes most of his cuts, but has not won since a playoff victory at the Transitions Tournament in March of 2012.

At 39-years-old, he is not done, but his career trend over the last five years is not encouraging, and he has still never won a major. He didn’t even qualify for The Masters this year. In the current season, Donald has entered 8 events, not contending in any, with a high finish of T17 at the Genesis Open.

The Northwestern grad still has a phenomenal short game, evidenced by his current ranking of 8th on Tour in strokes gained: putting, and he leads the Tour in sand save percentage. His driving game, however, has been a categorical disaster.

Now that Sergio Garcia has finally joined the ranks of Masters Champions, there is a good argument to be made that Matt Kuchar is the best player in the world without a major. He, Rickie Fowler, and Lee Westwood basically dominate that conversation. The Wake Forest alum nearly pulled off a Masters miracle, exploding into contention on the back nine, capped by an ace on the par-3 16th, part of a five-hole stretch that he played 5-under-par.

He was not able to get any closer after the ace, however, as disappointing pars on 17 and 18 led to a T4 finish for the week. It was perhaps the closest call in a major for the only man in the world with an Olympic Bronze medal in golf.

Kuchar, now 38, has done what he typically does recently. He racks up top-10s at an incredible rate, with seven or more in seven consecutive seasons. He had 10 last year with a high finish of third, both at the Byron Nelson Classic and the WGC-Bridgestone Invitational.

The world #17 has seven career victories, but none in majors, and none anywhere since his RBC Heritage victory in 2014. That Harbour Town victory was impressive, though; he shot a final round 64 in a come-from-behind effort to defeat Luke Donald by a single stroke.

In his two RBC Heritage attempts since his 2014 victory, he finished solo-5th (2015), and T9 (2016). His recent success in Hilton Head, combined with the form he showed at The Masters, might make him the favorite to win this week.

Other Notables In The Field

At #16 in the world, Tyrell Hatton is the highest ranked player in the RBC Heritage field. He’s been very successful in Europe, and has played well in his limited PGA Tour starts. That being said, he was a special kind of terrible at The Masters last week, hacking his way to an 80-78 start (+14) and missing the cut by 8 strokes. Only three players in the Augusta field fared worse, with two of those being 19-year-old amateur Toto Gana and 59-year-old Sandy Lyle.

Despite the nightmare week, Hatton should not be too discouraged, however. Prior to The Masters, he made it out of group play at the WGC-Dell Technologies Match Play, and before that had finished in the top 10 of his last three PGA Tour events. Grace won last year’s RBC, despite going 75-77 and missing the cut at The Masters, so it can be done.

Furyk, the 2015 RBC Heritage champion, did not get an opportunity last year to defend that victory, as it was part of the four-month stretch he missed after wrist surgery. The 46-year-old also won the memorable 2010 edition of this event, defeating Brian Davis in a playoff, after Davis called a penalty on himself.

Furyk missed the cut at The Masters last week, and has no finishes higher than T30 in 8 events this season, but with his experience, the 2018 Ryder Cup captain is still a threat to win anywhere.

Last week, Masters officials were asking for Hoffman’s measurements after the 40-year-old absolutely blew away the field during the first round at Augusta, shooting a 65, which was unfathomably low given the nearly unplayable conditions.

Hoffman fell back to earth in round two, finishing Friday ten strokes worse than Thursday, but he was still in the championship mix until Sunday, when a 6-over 78 dropped him into a tie for 22nd place.

Even still, it was a successful week for the man who also finished T2 at the recent Arnold Palmer Invitational. The final round also did him in at last year’s RBC Heritage, where a 4-over 75 led to a finish of T14.

Perhaps the hottest player in the RBC Heritage field is Russell Henley, who finished a very respectable T11 at The Masters, one week after winning the Shell Houston Open. He played three of his four rounds at Augusta, under-par, with a second-round 76 the only blemish on his card.

Henley also has two additional top-10 finishes on the season. He was T23 at this event last year in his fourth attempt at Harbour Town. His best finish was a T6 in 2013.

Along with Charley Hoffman and Lee Westwood, William McGirt was one of just three players to finish multiple strokes under par during the first round of last week’s Masters tournament. His 3-under round one 69 was by far his best day at The Masters, as a 73-74-74 finish dropped him into a tie for 22nd with Hoffman.

Two weeks prior, he played very well at the WGC-Dell Technologies Match Play, finishing a perfect 3-0-0 in group play, before losing to Soren Kjeldsen in the round of 16. McGirt finished T9 at Harbour Town last year, tied for his best finish in the event. He was also T9 in the 2014 edition.